Grizzlies favored to even series against Wolves 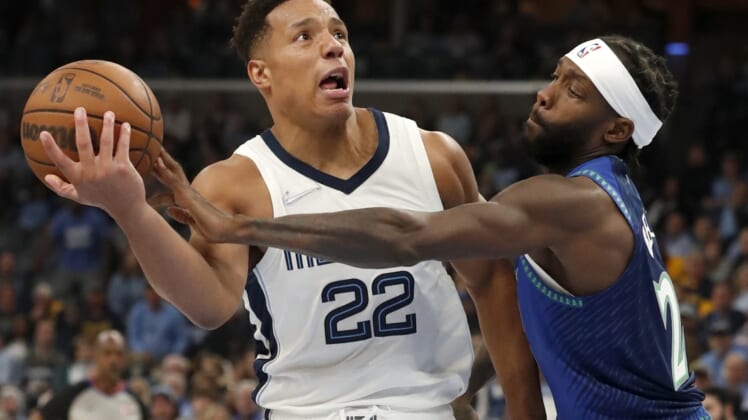 The Memphis Grizzlies will try to even their series against the visiting Minnesota Timberwolves when the teams meet in Game 2 of a Western Conference first-round playoff series Tuesday night.

Memphis won 56 games during the regular season, second most in the NBA, to earn the second seed in the conference. But the Grizzlies fell short in their postseason debut on Saturday afternoon, as the seventh-seeded Timberwolves pulled away for a 130-117 victory.

Grizzlies guard Desmond Bane said he and his teammates needed to do a better job when it comes to rebounding and second-chance points.

“Physicality is something that we felt like we addressed coming into the series, and I didn’t think that it was there (Saturday), at least at the level it needed to be to win,” Bane said. “We’re going to have to get grimy out there to win a playoff series.”

Minnesota is hoping to steal a pair of wins on the road to open the series. The Timberwolves won 46 games during the regular season and are appearing in the postseason for only the second time in the past 18 years. But they are on a roll after rallying for a win against the Los Angeles Clippers in a play-in game and beating the Grizzlies in Game 1.

A major reason for the Timberwolves’ surge is the performance of second-year standout Anthony Edwards, who scored 36 points in 40 minutes against Memphis on Saturday. Edwards shot 12 of 23 from the field, 4 of 11 from 3-point range and 8 of 8 from the free-throw line.

The same could be said in Game 1 for Timberwolves big man Karl-Anthony Towns, who finished with 29 points and 13 rebounds. He shot 11 of 18 from the field, 2 of 5 from long distance and all five free throws.

Teammate Malik Beasley will try to stay hot off the bench after scoring 23 points in the opener.

The Timberwolves tried to make it hard for Morant to get to the rim. He finished with 20 free throws, making 16 of them, as Minnesota committed foul after foul.

Dillon Brooks added 24 points on 7-of-14 shooting, including 3 of 4 from beyond the arc, to give the Grizzlies a chance to win. Bane added 17 points.

Memphis big man Steven Adams struggled badly in his matchup against Towns. He finished with zero points and three rebounds in 24 minutes.

Brooks said the Grizzlies can’t afford to slip up in back-to-back games.

“This series is going to be decided on 50-50 balls and rebounding,” he said. “The real grit and grind (stuff).”

The 240.5-point Over/Under at both sportsbooks is the highest among Tuesday’s three playoff games.

Despite being down 0-1 in the series, the Grizzlies remain the third-biggest NBA title liability for BetMGM. Memphis opened the season as a +15000 longshot but those odds have shifted to +2000 with the Grizzlies backed by 6.5 percent of the championship tickets and 5.2 percent of the handle.