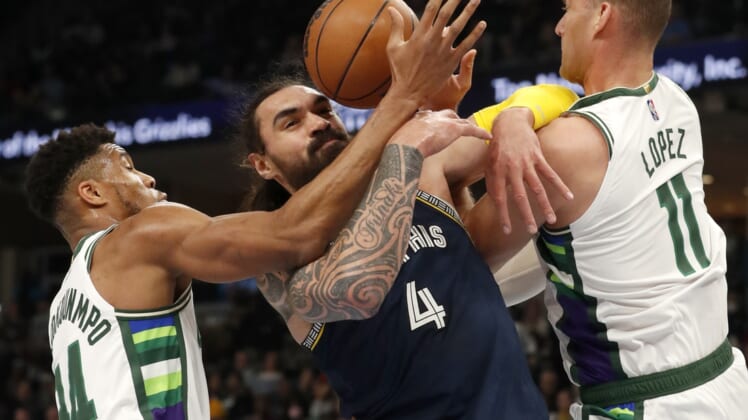 The 6-foot-2 guard came off the bench and shot 8-of-11 from the field, including 6-of-9 from 3-point range, to lead the Grizzlies (52-23) to a split of their season series with Milwaukee.

Desmond Bane scored 20 points for the Grizzlies and Dillon Brooks chipped in 19.

Giannis Antetokounmpo paced the Bucks (46-28) with 30 points on 11-of-20 shooting to go with 11 rebounds and four blocks. Khris Middleton supplied 16 points, and reserve Bobby Portis chipped in seven points and 11 rebounds.

Milwaukee struggled with its ball security, committing 13 total turnovers. It also had its worst 3-point shooting performance (21.9 percent) from beyond the arc since Jan. 21.

The Grizzlies went into the break with a 59-46 lead after holding the Bucks to just 18 points in the second quarter. Bane and Melton led all scorers with 12 points apiece, and Brooks had 11.

Memphis dominated down low, scoring 26 points in the paint compared to Milwaukee’s 16. The Grizzlies also cashed in at the free throw line, going a perfect 11-for-11 in the half.

Antetokounmpo had team highs of 10 points and nine rebounds in the first half, but he went just 3-for-11 from the field. Middleton had nine points, and the Bucks sunk just five of their 19 (26.3 percent) 3-point attempts in the half.

After trailing by 18, Milwaukee pulled within 13 with 7:02 remaining in the third. The comeback would be short-lived, though, as the Grizzlies later hit four 3-pointers within a two-minute span and led by 19 to start the fourth.

The Bucks got no closer than 15 in the fourth quarter.

In a high-scoring first quarter, Brooks went for 11 points and the Grizzlies closed the frame on a 12-5 run to capture an early four-point lead.