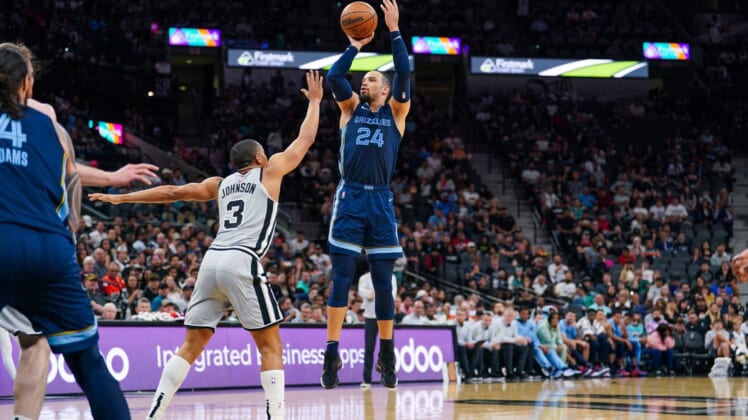 The victory allowed Memphis (54-23) to clinch the second seed in the West. It was the Grizzlies’ sixth straight win.

The Grizzlies led by 18 points late in the third quarter before San Antonio roared back to tie the game at 93 early in the fourth. Memphis never allowed the Spurs to see the front, building its advantage back to eight points only to see San Antonio make another late push.

The Spurs held Memphis scoreless the final 2:35 and clawed to within 112-111 on Keldon Johnson’s tip in with 27.8 seconds left. After a miss by the Grizzlies and a timeout, San Antonio ran a final play for Johnson, who missed a contested layup with 2.7 seconds remaining, allowing Memphis to escape with the victory.

Dillon Brooks added 21 points for Memphis, with Desmond Bane and De’Anthony Melton scoring 16 each and Brandon Clarke hitting for 10. The Grizzlies played without star guard Ja Morant for the sixth straight game (and seventh in Memphis’ past eight) because of a knee injury.

Dejounte Murray tied a career-high with 33 points and added 13 rebounds for San Antonio (31-45) while Johnson scored 23 and Devin Vassell had 19.

The Grizzlies led 31-27 after a back-and-forth first quarter in which they hit 6 of their 11 shots from beyond the arc and got eight points from Jones to offset Johnson’s 11 points in the period.

San Antonio pulled to within 35-33 on Jakob Poeltl’s layup at the 9:20 mark of the second period before the Grizzlies forged a 12-0 run behind via five points from Clarke and four from Bane. Memphis pushed its advantage to 17 points on Brooks’ 3-pointer with 1:23 to play in the half and went to the break up 65-52.

Brooks paced the Grizzlies with 13 points in the half while Bane had 12 and Clarke scored 10. Memphis outshot the Spurs 51 percent to 46.3 percent over the first 20 minutes.