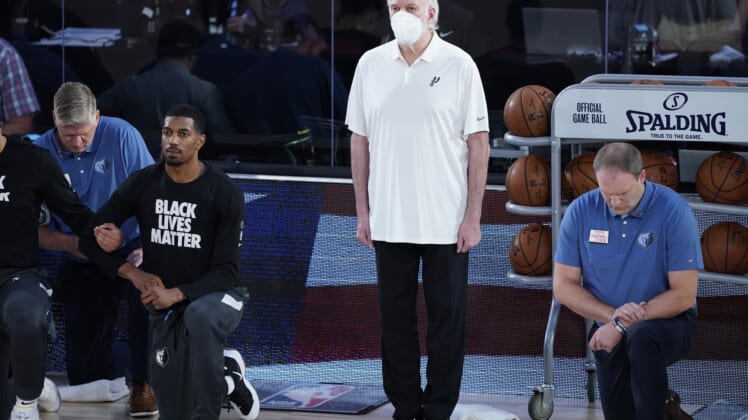 The NBA is about a week into the resumption of its 2019-20 season at Walt Disney World in Orlando. Despite the ongoing pandemic plaguing the United States, it has gone off without a hitch.

In fact, the Association announced on Wednesday that it had zero players test positive for COVID-19 over the past week. In talking about this and more, one of the greatest head coaches of all-time praised NBA Commissioner Adam Silver and his leadership.

“There’s absolutely no doubt that the NBA, under the leadership of Adam Silver, has done a magnificent job of being visionaries in the sense of looking at the big picture and trying to figure out what unintended consequences may appear,” Popovich said, via Mark Medina of USA Today. “Right down the line since the day we got here (in Orlando), everything has been so efficient, disciplined, and done with ease.”

It certainly is an interesting dynamic given that the NBA decided to resume its season in a bubble after it was initially suspended back on March 11. While the Association has had no real issues pertaining to the COVID-19 pandemic, Major League Baseball has struggled through the first two weeks ago of its season.

That includes multiple teams dealing with outbreaks of the virus. The primary difference here is that MLB is having its teams play outside of a bubble at their home venues. This could be an issue for the NFL when its season starts Sept. 10, too.

Is Adam Silver the best commissioner in sports?

This is a debate that has raged since he brought the NBA to the modern era after replacing the late-great David Stern as commissioner. It’s taken on new meaning with the NBA’s willingness to get involved in the societal issues of the day impacting the United States.

However, it’s come up more recently with his handling of the pandemic compared to that of MLB Commissioner Rob Manfred. The latter has been criticized at every turn, even after the 2020 MLB season started late last month.

Popovich’s full comments can be found here. He also talks about how Americans in general have responded to the pandemic and the lack of leadership, in his words, from the government.