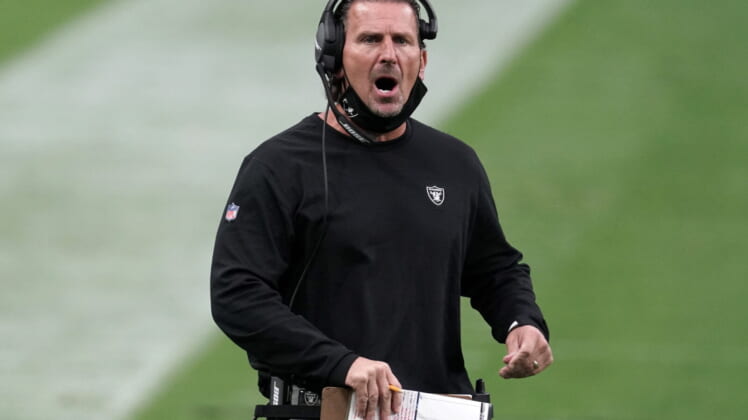 In more ways than one, the Las Vegas Raiders will attempt to find an identity Sunday.

Their upcoming matchup with the Denver Broncos won’t define the season with 11 games left to play, but it will show the direction of this club under interim head coach Rich Bisaccia.

The Raiders defense remains the same under Gus Bradley, but offensive coordinator Greg Olson has to pick up where former head coach Jon Gruden left off in addressing a pressing issue.

At the beginning of the week, Gruden said the offense didn’t have an identity, and now Greg Olson has to define it. On Thursday, he spoke about what the unit has done so far and the focus going forward.

“If you look at how the season started, we’ve been heavy pass-heavy dropbacks…,” Olson said. “You’re trying to marry the run game with the play-action game and the movement game. We’ll continue to look at ways to make those two work together.”

The Raiders rank fourth in pass attempts with the fourth-most yards through the air. Quarterback Derek Carr has shouldered the load while the ground attack has pulled a no-show for four out of five contests. Las Vegas lists 23rd in total carries and 29th in rushing yards.

If history repeats itself between Greg Olson and Carr, we’ll see more play action for the remainder of the season.

According to Pro Football Focus (subscription required), Carr completed 76 of 128 pass attempts for 642 yards and eight touchdowns without an interception on throws out of play-action through his 2014 rookie term under Olson, who served as the play-caller that year.

The Raiders don’t need an effective ground attack in order to execute effectively in play-action—just the threat of a healthy Josh Jacobs can draw a linebacker or safety a few steps too close to the line of scrimmage. With a plethora of weapons on the perimeter, Carr can find favorable one-on-one matchups all over the field.

Of course, the Raiders have to solve their offensive line issues as well. Last week, they moved rookie offensive lineman Alex Leatherwood from right tackle to right guard, inserted Brandon Parker into the vacated spot and benched Jermaine Eluemunor.

As Greg Olson mentioned Thursday, he’s going to mix elements of the run, pass and “movement game.” Don’t be surprised to see him try to neutralize the Broncos’ pass rush with some “window dressing,” which calls for pre-snap motions and disguised run plays to break away from a pass-heavy dropback script.

Olson must use some creativity to take some pressure off a struggling offensive line, or else Carr will remain on pace to take 51 sacks.

Also, remember Gruden’s offensive scheme isn’t easy on young and veteran players because of its complexity. On Wednesday, tight end Darren Waller briefly mentioned the thought that Greg Olson could simplify the offense.

“I’m excited to move forward with who we got,” Waller said. “I believe in Oly [Olson]. I believe that he gives us a chance to win. I believe that he believes in Derek and his ability. They’re going to make things a little more simple for guys…”

In a less intricate system, second-year wideouts Henry Ruggs III and Bryan Edwards could take bigger leaps, using their natural talent to win matchups downfield, which may result in quicker starts for the offense. Vegas has yet to score a touchdown in the first quarter this season.

Don’t underestimate the potential return of Marcus Mariota, who could provide another layer to the offense.

If Mariota could stay healthy, he can gash defenses on designed runs. In the season opener, the dual-threat quarterback rushed for 31 yards right up the middle of the Baltimore Ravens aggressive front and then limped off the field with a calf injury. Expect Greg Olson to use a Mariota package as an offensive wrinkle to catch defenders off-guard.

Despite the need for a little more balance, Greg Olson must realize the Raiders’ offensive strength, which is putting the ball in Carr’s hands and allowing him to make decisions with a talented pass-catching group that features Waller, Ruggs, Edwards, Hunter Renfrow and even running back Kenyan Drake in the short passing game.

Because of a subpar offensive line, Carr shouldn’t throw the ball 40-plus times. Olson will need to mix in timely runs to keep defenses honest.

However, if the Raiders truly believe they have a top-10 quarterback in Carr, and they’re aware that his camp will approach the front office about an extension in the offseason (h/t ESPN’s Adam Schefter), why not assess his value in a pass-centric attack? That’s a deviation from Gruden’s run-heavy philosophy, but Carr is an eighth-year veteran with arguably his most dynamic pass-catching group. The Raiders offense should sink or swim with the ball in his hands.