Green Bay versus 49ers: A fantasy sit or start guide to the 2020 matchup 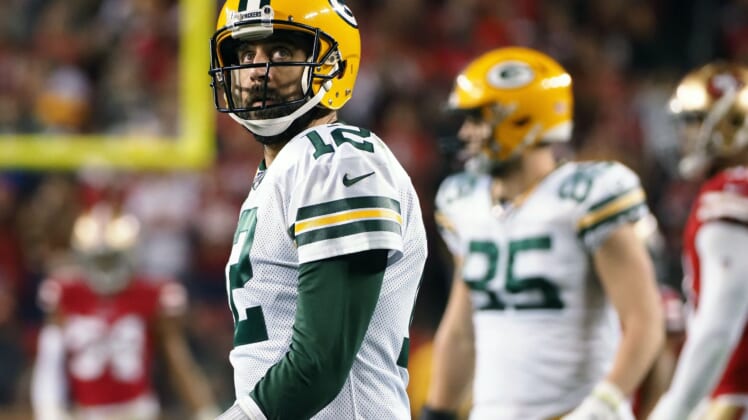 This week’s Thursday Night Football clash will provide Aaron Rodgers a chance to avenge last January’s loss to the 49ers, while fantasy owners hope to see plenty of points roll in during this NFC showdown.

With that said, here is a fantasy sit-and-start guide for this game’s key players.

With Jimmy Garoppolo sidelined for the unforeseen future due to re-injuring his ankle, Mullens will start Thursday against the Packers. For those needing to lean upon Mullens in fantasy this week, fear not. Mullens did a fantastic job filling in, racking up 238 passing yards and two touchdowns against the Seattle Seahawks. With a somewhat depleted 49ers roster, Mullens should have to air it out a lot facing Green Bay’s defense, which kindly allows 26.7 points per game.

Tonyan’s fantasy performances have been up and down each week. In his next game against San Francisco, Tonyan is a sit in fantasy. The 49ers stand out at defending tights ends and have allowed just 35.6 yards on average per game to this position and only one score over the whole 2020 season.

Hasty seems to be the hot hand for the 49ers and he has a dream fantasy matchup on Thursday night. The Packers are simply awful at stopping the run, and they last got dismantled by letting Dalvin Cook of Minnesota rush for 163 yards and three touchdowns. It is with no question that Green Bay has yielded the most running back fantasy points in 2020.

Who? Dwelley will replace George Kittle, who is also out for weeks to come after breaking a bone in his foot. While Dwelley did score a touchdown in his last game, he is a fantasy sit in TNF against Green Bay. While the Packers have issues defensively, it has allowed just one tight end to score all season. Surely, there are better options out there.

Get this rock star duo from the Green Bay Packers roster into Thursday Night Football lineups everywhere. The last time Rodgers and Adams faced off against San Francisco, this elite fantasy pair combined for whopping 464 total yards. Rodgers tacked on two touchdowns as well. Both are must-starts as the Packers look to get back to winning in the NFC.

The 49ers defense can be an ideal fantasy start most weeks. However, Green Bay’s offense is stacked with too much talent, which does not make San Francisco a wise defense to gamble with in this TNF matchup.

Jones is expected to suit up (calf) against the 49ers. However, if he suffers any setback, or the Packers gain an early and easy lead, Jones may be stashed on the bench for safe keeping. In the case the Packers are cautious with Jones, the backfield looks to be shared by Tyler Ervin and Dexter Williams. Both make for questionable fantasy plays against a top-ranked 49ers run defense.

The bottom line is Jones may not see much work, if at all. Other fantasy running back options should be considered.

Update, November 3, 2020, 4:15 PM ET: Packers Running Back, Jamaal Williams (who has been covering for Jones) is on the COVID-19 list, and has been ruled out for this Thursday Night Football Game.

This Thursday Night Football game occurs at 8:20 PM (ET) at Levi’s Stadium in Santa Clara, CA on Nov. 5. Viewers can watch their fantasy players either on their local Fox station, stream it on Amazon Prime or on NFL Network.

Update, November 9, 2020: Green Bay handily beat the 49ers, 34-17, with Aaron Rodgers passing for fantasy gem of a game which consisted of 305 yards and four touchdowns!