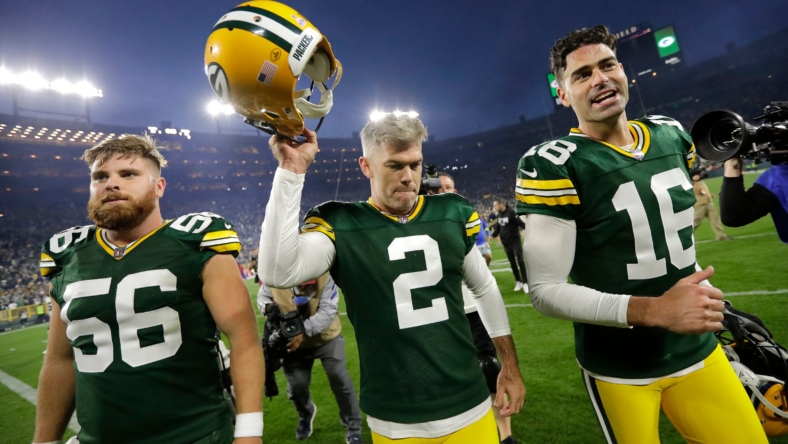 It was a whole lot closer than expected, but the Green Bay Packers eeked out a close win over Bill Belichick and the New England Patriots Sunday afternoon at Lambeau Field. The Patriots took the Packers to overtime, and with four seconds left, 16-year veteran Mason Crosby drilled a game-winning field goal.

It was the ultimate chess match between quarterback Aaron Rodgers and Bill Belichick. New England was able to force two turnovers, including the fourth pick-six in Rodgers’ NFL career. However, Green Bay was able to total over 440 scrimmage yards, including 199 rushing yards.

Great teams find ways to win close games even when they are not at their best. The Packers did exactly that in Week 4. Here are the three takeaways from Green Bay’s three-point win over New England.

The Green Bay Packers may have hit the jackpot on the edge. After having a career year in each of his first three NFL seasons, Rashan Gary has turned into a superstar edge-rusher. That was very evident on Sunday against New England, especially in the first half.

Gary had seven tackles, two sacks, one forced fumble, one fumble recovery, and one tackle for loss. Against one of the most consistent offensive lines in the league annually, Gary was an absolute game-changer. He has five sacks in four games so far and is well on track to surpass each of his career-highs in sacks, tackles for loss, pressures, and hurries. No. 52 is an absolute nightmare matchup on the edge and is playing with his hair on fire right now. If he can keep up this effort, Gary should be in the Defensive Player of the Year conversation at the end of the season.

Related: Green Bay Packers’ De’Vondre Campbell and Quay Walker on the cusp of becoming one of NFL’s elite linebacking duos

When Green Bay traded Davante Adams this offseason, the way the Packers needed to replace him was through a collective effort. On Sunday afternoon, Green Bay’s pass-catching group put forth a collective effort that should give all Packers fans confidence moving forward.

Allen Lazard led the team with six receptions for 116 receiving yards. Romeo Doubs is becoming a stud, as he added in five receptions, including a nice back-shoulder touchdown catch. Randall Cobb is Mr. third down for his old friend Aaron Rodgers. Christian Watson proved how dangerous he is with the ball in his hands on a 15-yard rushing touchdown. Not to be outdone, starting tight end Robert Tonyan also caught his first touchdown of the season 20 yards out in the red zone.

Rodgers targeted eight different receivers. Add that successful receiving output to 199 yards on the ground, and the Green Bay offense is becoming more and more dangerous by the week.

A win is a win

Beating an under .500 team who was down to their third-string quarterback by three at home in overtime probably isn’t the best way to tell the football world that you are the best team. But in the National Football League, a win is a win.

Beating Bill Belichick while producing over 440 yards of total offense is a great sign for a team filled with younger players. It is important to note that the Packers won this game without All-Pro cornerback Jaire Alexander and starting safety Adrian Amos. The wide receiver core continues to get better and better each week. It was a close win too. Experience winning those types of games cannot be overlooked.

After a rough Week 1 performance, the Packers have reeled off three consecutive wins. On deck, this team will face the New York Giants in London, the New York Jets, and the Washington Commanders before they face the Buffalo Bills in Week 8. In all likelihood, Green Bay should be 6-1 entering that matchup against the Bills. In the words of Al Davis, just win baby.