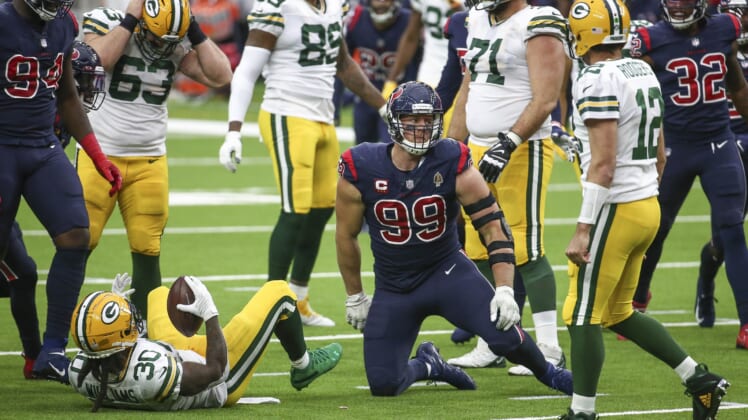 The Green Bay Packers have a history of signing a future Hall of Fame defensive player at least once a decade. With J.J. Watt now a free agent, the Wisconsin native might continue that trend this offseason.

Watt received interest from across the NFL the moment he became a free agent. While the three-time Defensive Player of the Year is expected to relax this weekend before weighing his options, the suitors are already lining up. Thanks to his immediate release, the 31-year-old can sign before NFL free agency opens and the team that lands him won’t be impacted by draft-pick compensation.

According to Sports Illustrated’s Bill Huber, the Green Bay Packers are one of around a dozen teams who immediately expressed interest in Watt after the Houston Texans waived him. Furthermore, there is a belief that there will be mutual interest between the two sides.

Watt makes a lot of sense for the Packers and they are one of the most popular landing spots discussed. A Wisconsin native, the All-Pro defensive end spent most of his life playing football in Wisconsin. He starred at Pewaukee High School and then became a first-team All-American and the Lott Trophy winner for the Badgers.

Playing in Wisconsin would also allow him to be near his wife. Kealia Watt is a professional soccer player for the Chicago Red Stars, just three hours away from Lambeau Field.

Watt reportedly has specific priorities that will help determine which team he plays for in 2021. He wants to play for a Super Bowl contender, seeks a team that is the right cultural fit for him and wants to play in a defensive scheme that puts him in a great position to thrive.

Teaming up with Aaron Rodgers would certainly give him a shot to win Super Bowl LVI. He could also join a defense with Pro Bowl edge rusher Za’Darius Smith, emerging star Rashan Gary and defensive tackle Kenny Clark. Paired with that trio, Green Bay would suddenly boast one of the NFL’s best defensive lines.

On paper, it’s a perfect fit. However, the Packers are going to face a ton of competition. Watt could target the Pittsburgh Steelers, a team that would pair him with his brothers T.J. and Derek Watt. He would also be a fantastic fit for the Cleveland Browns, a roster that might be one or two defensive pieces away from a Super Bowl contender.

The 2021 NFL salary cap is also a huge factor. Green Bay is currently $20 million over the projected cap ceiling and that came after restructuring David Bakhtiari’s contract. Unless Watt is willing to sign a team-friendly contract for one year or a back-loaded deal for multiple seasons, it would be extremely difficult for the Packers to sign him.

With that said, Rodgers is putting pressure on this front office. The Green Bay Packers signed Reggie White in 1993 and won a Super Bowl a few years later. In 2016, they signed Charles Woodson and he played a crucial role in their 2010 Super Bowl title. If this defense adds J.J. Watt, a Lombardi Trophy could follow.