The Green Bay Packers came into the 2021 NFL season with an elite offense and a defense many believed had the talent to help this team compete for a Super Bowl. Through two weeks, it’s become evident there are big problems on the defensive side of the ball.

Things got off to a brutal start in Week 1. Aaron Rodgers and the Packers’ offense only had three drives in two quarters against the New Orleans Saints. It was the result of a defense that allowed consecutive 15–play drives, the first time an NFL team achieved that since 2000.

After allowing New Orleans to rush for 171 yards and score five touchdowns through the air, it became evident that Green Bay’s defense had more problems than first thought. It seems that sentiment was even shared by the front office, who started looking for ways to improve that unit.

According to CBS Sports’ Jonathan Jones, the Packers worked the phones early in the week trying to find help at linebacker via trade. Days of effort were unsuccessful, with other NFL teams wanting to keep the linebackers they were previously open to moving.

Part of the team’s desire to strengthen its linebacker corps is likely due to injury. Green Bay placed outside linebacker Za’Darius Smith on injured reserve before Week 2, ruling him out for at least three weeks. With a roster spot created, linebacker La’Darious Hamilton was signed from the Tampa Bay Buccaneers practice squad.

Fortunately for the Packers, Rodgers responded to claims his offseason drama caused all the problems with an MVP-like performance on Monday Night Football. The tandem of Rodgers and Jones carried the Packers to victory and injecting life into a fan base that needed it. 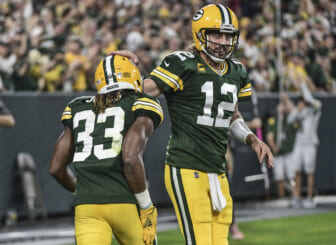 But Green Bay’s defense still had problems in Week 2. Detroit Lions tight end T.J. Hockenson hauled in eight receptions for 66 yards and a touchdown. On top of that, Detroit averaged 5.7 yards per carry and the Packers managed just three quarterback hits on Jared Goff until late in the game.

It’s clear the defense isn’t improving under defensive coordinator Joe Barry. With the Green Bay Packers seemingly taking an all-in approach this season, it would be surprising if deals aren’t made before the NFL trade deadline in November. If they don’t, even reaching the NFC Championship Game again seems unlikely.