The second-year signal-caller’s preseason debut Saturday night was cut short after he got “dinged” during a sack late in the second quarter, according to head coach Matt LaFleur.

Love, 22, completed 12 of 17 passes or 122 yards and one touchdown before being replaced by Kurt Benkert in a 26-7 loss to the visiting Houston Texans. 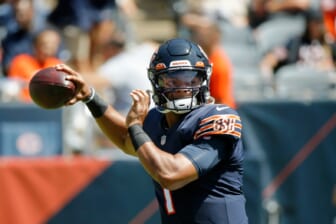 The Packers drafted Love in the first round in 2020 out of Utah State but he did not see any action as a rookie last season. He is expected to be the backup to three-time MVP Aaron Rodgers this season.