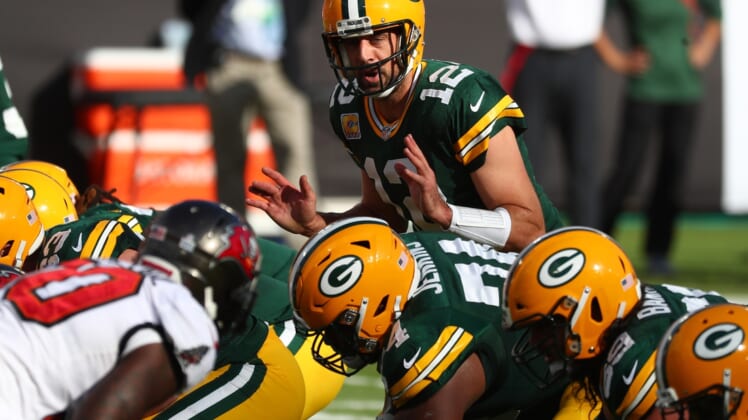 The Green Bay Packers are the most heavily-backed team by bettors entering this weekend’s conference championships.

The Packers are 3.5-point favorites by several sportsbooks, with 74 percent of the handle and 78 percent of the moneyline bets at DraftKings backing Green Bay against Tampa Bay in the NFC Championship Game.

The story is similar at BetRivers, where the Packers’ 3.5-point spread line is being backed by 78 percent of the handle and 68 percent of the bets. The moneyline handle is three times more than any of the other three teams playing this weekend.

The Bucs beat the Packers 38-10 in Tampa Bay in Week 6, but the rematch will come at Lambeau Field where Sunday’s forecast calls for a high of around 30 degrees with light snow.

Green Bay has covered and hit the over in three consecutive games at BetRivers, while Tampa Bay is 3-2 against the spread in its past five games.

It will be the first postseason meeting between Packers quarterback Aaron Rodgers and Bucs quarterback Tom Brady.

The Buccaneers spotted Green Bay 10 first-quarter points in Week 6 and then spent the rest of the game pounding and dismantling the Packers in a 38-10 shellacking.

Tampa Bay linebacker Devin White didn’t mince words afterward, saying the Packers “didn’t deserve to be on the field with us.”

“You know, hey, he was right. They whipped us,” LaFleur said earlier this week. “There’s no sense in talking about it. The only thing you can do is you’ve got to prepare the best you can and then go prove it.”

Rodgers threw two interceptions — one returned for a touchdown by cornerback Jamel Dean — and was sacked four times while passing for just 160 yards. His accuracy rate (45.7 on 16-of-35 passing) was his worst of the season.

Though things went exceedingly well in the first matchup, Buccaneers coach Bruce Arians can sum up the meeting this way: Doesn’t mean a thing.

Tampa Bay reached the NFC title game with a solid 30-20 win over the New Orleans Saints last Sunday. The Packers advanced with a 32-18 win over the Los Angeles Rams the previous day.

In fact, the Buccaneers also won at Washington this postseason and have won seven straight road games.

“Let’s keep that streak going — that would be pretty sweet,” Brady said. “Let’s get another one. We’re going to be challenged to get it because we’re going up against a great football team.

“It’s a great environment. This is one of the coolest stadiums in the league to play in. I know they’re excited, we’ll be excited, and it will make for a great football game.”

Brady, a six-time Super Bowl champ, will be playing in his 14th career league championship final and went 9-4 in AFC title games during his stint with the New England Patriots. The 43-year-old has been performing like someone younger as he passed for 4,633 yards and set a franchise record with 40 touchdown passes in the regular season.

Rodgers also had a stellar season with 4,299 yards and a franchise-record 48 touchdown passes and is a heavy favorite to win NFL MVP honors. He is playing in his fifth NFC title game and is looking to reach his second Super Bowl.

That lone Super Bowl appearance was 10 years ago, but Rodgers insists he isn’t feeling a raise in the stress level.

“No more pressure than usual,” Rodgers said. “It starts with the mentality and focus. Obviously, I put pressure on myself to perform every single week. There’s a lot to be said to be able to harness that pressure and the fear of failure and focus it into a real positive. But I don’t feel any extra pressure this week.”

Despite the sour outing against the Buccaneers, Rodgers and the Packers committed a league-low 11 turnovers in the regular season. Green Bay also features elite wideout Davante Adams, who led the NFL with 18 touchdowns receptions while making 115 catches for 1,374 yards.

Tampa Bay led the league in defending the run (80.6 yards per game), second-year pro White (140 tackles, nine sacks) blossomed into one of the top linebackers in the NFL and Mike Evans (NFL record seventh straight 1,000-yard season to begin a career) leads a deep group of targets.

Sunday’s game marks the first time Green Bay has hosted the NFC title game since the 2007 season when Rodgers was the backup to Brett Favre. The Packers lost to the New York Giants 23-20 in overtime.

Tampa Bay is playing in its first NFC championship contest since the 2002 season. The Buccaneers posted a 27-10 win over the host Philadelphia Eagles and went on to rout the then-Oakland Raiders 48-21 in the Super Bowl.