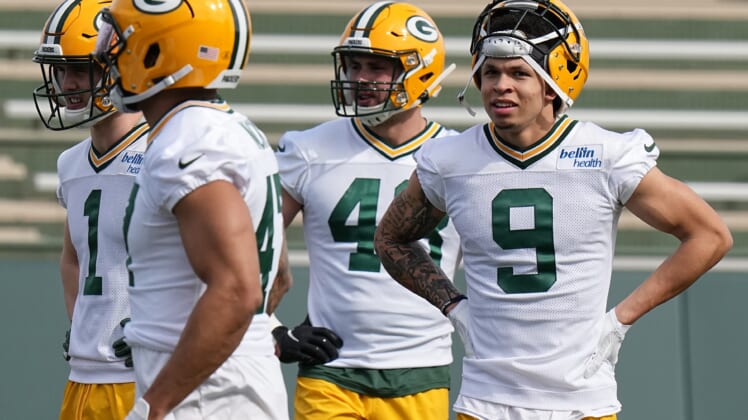 The Green Bay Packers announced 10 of their players would begin training camp on the physically unable to perform (PUP) list. Additionally, wide receiver Sammy Watkins was placed on the non-football injury list (NFI) with an undisclosed injury.

However, as the team started training camp practices on Wednesday, general manager Brian Gutekunst had some very interesting updates on several of their injured players. These updates will significantly impact some key position battles as players vie for a spot on the 53-man roster.

Related: Ranking the concern level for each Green Bay Packers player on the PUP list

The Green Bay Packers signed Sammy Watkins to a one-year contract worth $1.85 million with just $350,000 guaranteed. It is a deal that is a win-win for both parties. If Watkins can remain healthy, he will be a top-three wide receiver (at least) on an offense led by four-time MVP Aaron Rodgers.

He can use a potentially productive season to garner larger contract offers next offseason. The Packers, for their part, have low-risk investment on a player that may become a major weapon in their offense.

The key, of course, is staying healthy. It is such a big question that ESPN’s Rob Demovsky labeled him a potential cut candidate during training camp. Watkins’ addition to the NFI list was not one that spelled good things for his chances making the roster. However, Brian Gutekunst told the media on Wednesday that the injury is not serious and Watkins will be back soon.

Christian Watson was the Packers’ second-round draft pick, one they traded up for on the second day of the 2022 NFL Draft. Even though Watson did not sign his rookie contract until this past weekend, he did participate in OTAs and mandatory mini camp.

It was during these team activities that Watson suffered some kind of injury, one that Gutekunst said needed “a procedure.” This procedure, as it turns out, was a minor knee surgery.

With Watkins out for a little while and Watson out for an undetermined amount of time, there is plenty of intrigue around the rest of the Packers’ wide receivers. Allen Lazard, Randall Cobb and Amari Rodgers are locks for the roster.

The same could be said of Watson’s fellow rookie receiver Romeo Doubs. After them are Samori Toure, Juwann Winfree, Malik Taylor and Danny Davis. Additionally, the Packers signed Osirus Mitchell and Ishmael Hyman to one-year contracts after Watkins and Watson were declared out.

Packers head coach Matt LaFleur has never taken more than six wide receivers out of training camp onto his 53-man roster. Lazard, Cobb, Rodgers, Watson, Watkins and Doubs make six. Without two of them competing, the others can really make a case for their individual selves to make the roster.

Winfree and Taylor each spent time on the Packers’ practice squad last season and were used in some games when injuries piled up. Indeed, there will be some tough decisions to make at the end of preseason, and these players can make them even tougher.

Mason Crosby is the all-time leading scorer of the Green Bay Packers franchise. Unfortunately, the veteran kicker had his second-worst season of his career in 2021. He is also in the final year of his contract in his Age-38 season.

According to Crosby, he felt some pain in his knee during OTAs. As a result, he had a minor procedure to get his knee cleaned up. His goal is to be ready by Week 1.

The other kicker that the Packers have in camp is Gabe Brkic. He was an undrafted free agent who was picked up by the Minnesota Vikings after this year’s NFL Draft. However, they released him back in June. The Packers immediately picked him up knowing that Crosby had a knee issue. If Crosby cannot get right by the start of the season, Brkic could become the new kicker in Green Bay sooner rather than later.

Like Mason Crosby, Dean Lowry is entering the final year of his contract. Even though he was initially put on the PUP list a few days ago, the Packers announced that he would be activated for training camp.

This move is important for Lowry because the Packers could save north of $4 million just by cutting him. If he is outperformed by young players such as Jack Heflin, Jonathan Ford, Chris Slayton, or Akial Byers, he could find himself looking for work elsewhere.

Lowry did have the best season of his career last season, notching 5.0 sacks and playing in all 17 games. He is a solid defender, but being present and able to play is going to be vital for him.