In order to get Aaron Rodgers to report to training camp, Green Bay Packers general manager Brian Gutekunst had to cave to the MVP quarterback’s multitude of demands after misguided attempts to play hardball all offseason.

To his credit, Gutekunst is at least finally admitting to the public that Rodgers has earned the right to influence the future of the franchise. Check out what the GM said Wednesday regarding Rodgers, per The MMQB’s Albert Breer:

Part of Rodgers’ demands, references in Breer’s report, was for Green Bay to bring back one of his favorite veteran targets in wide receiver Randall Cobb. The Packers fulfilled that by trading for Cobb on Wednesday, and the wideout broke the news himself.

Another condition of Rodgers’ return to Lambeau Field for one final season was his choice on where to be traded in 2022.

It’s nice that Gutekunst is giving Rodgers some say now in how the team is built around him, but it’s too little, too late. Gutekunst has a tall task ahead of him to maintain a playoff-contending roster once Rodgers inevitably departs.

How Green Bay Packers might look in post-Aaron Rodgers era

Well, Gutekunst triggered Rodgers’ eventual exit in the first place by not informing him of the decision to trade up in the 2020 NFL Draft for Jordan Love. After a rookie year in which he couldn’t move past No. 3 on the depth chart, Love seems to be back on course in his development this year.

But the larger concern is who Love is going to be throwing to, and how well he’ll be protected. This offseason, Green Bay lost center Corey Linsley in free agency, and have No. 1 receiver Davante Adams entering a contract year.

Adams recently broke off extension negotiations with the Packers. There’s another sign Gutekunst is in over his head when it comes to dealing with star players. Stud pass-rusher Za’Darius Smith is also rumored to be fed up with his contract situation and could want out of Green Bay. 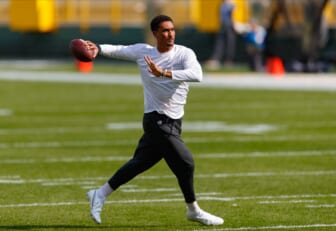 So not only is Rodgers out the door in 2022, but the usually-stellar offensive line is in flux, and Love may be without the Packers’ clear go-to target in the passing game in Adams, along with the team’s most disruptive edge defender.

Translation: Adams will probably go wherever Rodgers does, leaving Love with even more of an uphill battle as the encore act for Rodgers and Brett Favre. Maybe that’ll finally trigger the front office to draft an offensive weapon in the first round. Who’s to say?