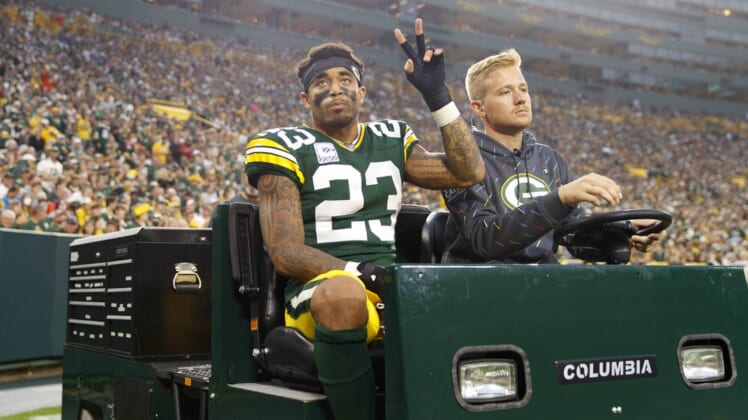 Green Bay Packers cornerback Jaire Alexander will avoid shoulder surgery for now but will not be available Sunday at Cincinnati.

Head coach Matt LaFleur said Friday the team is hopeful that Alexander’s AC joint injury will heal on its own over the next few weeks.

“I think we’ve got better clarity with that,” LaFleur said. “Certainly it’s just one of those things we’re going to let heal and see where it’s at down the line before making that determination, but we’re hopeful that it will heal the right way and he’ll be back with us in a matter of weeks.”

Alexander, 24, suffered the injury during the third quarter of Green Bay’s 27-17 victory over the Pittsburgh Steelers last Sunday.

A first-round pick in 2018 and a Pro Bowl selection last season, Alexander has 188 tackles and five interceptions in 48 career games (46 starts). He has 13 tackles and one pick this season.

Cornerback Kevin King (concussion) has been removed from the injury report and is set to start in Alexander’s place when the Packers (3-1) visit the Bengals (3-1). King has missed the past two games.

Three offensive linemen were listed on Friday’s report. Center Josh Myers (finger) has been ruled out for Sunday, while tackles Elgton Jenkins (ankle) and Dennis Kelly (illness) are both questionable.