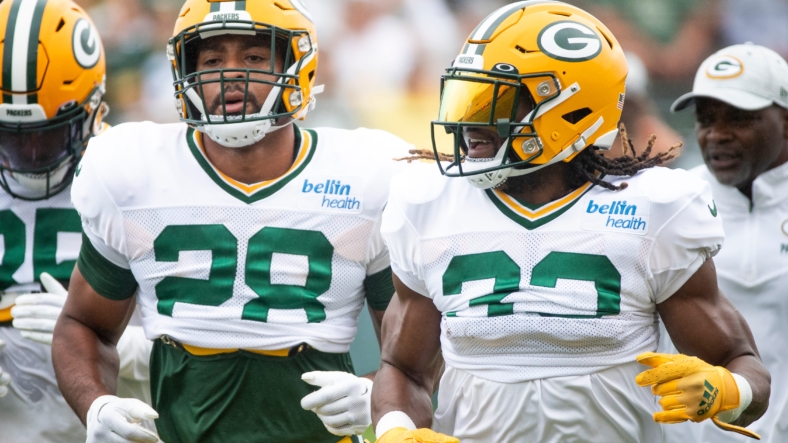 The Green Bay Packers and Minnesota Vikings will renew their historic rivalry on Sunday as the NFL season kicks off for both teams. This will be the 124th overall meeting between the two sides in a rivalry that dates back to 1961. Green Bay leads the overall series 64-56-3. Aaron Rodgers and the Packers come in fresh off of their third consecutive 13-win season and their third straight NFC North crown. But Minnesota is coming for that crown and will be looking to start a new era with Kevin O’Connell as head coach.

The Packers are going to be playing on the road in a very tough environment. U.S. Bank Stadium is one of the loudest stadiums in the sport. The team will also most likely be without supposed No. 1 receiver Allen Lazard, who is dealing with an ankle injury. But with Rodgers, a talented defense, and an elite backfield, Green Bay will have their fair shot at starting off the 2022 regular season with a win. Here are three bold Green Bay predictions for Sunday’s game.

Romeo Doubs will have 100 receiving yards and a touchdown

Despite being a rookie, Romeo Doubs has had one heck of a training camp. He caught two touchdowns in the preseason for Green Bay and is due for a solid rookie season in Green and Gold. Aaron Rodgers is not going to shy away from the fact that he has multiple rookie receivers he will be trying to get the ball to. Expect to see the four-time MVP to get them the ball early and often.

Doubs is wearing No. 87, which is fitting. He could very well become a big-time playmaker like what Jordy Nelson was for No. 12. However, it will be the first NFL game for the Nevada star in Doubs. Emotions will be running high. That’s why we think Rodgers will calm him down with some early passes to get him feeling more comfortable. Then, they will continue to use him in a big way as the game moves along to see what else he can handle.

The Packers have arguably the best group of defensive backs in the entire league. All-Pro Jaire Alexander has earned a reputation for being one of the best shutdown corners in football. Rasul Douglas is one of the best stories in the league and led the team with five interceptions a season ago.

With a pass-rush that includes Pro Bowl defensive tackle Kenny Clark and Defensive Player of the Year candidate Rashan Gary, Vikings quarterback Kirk Cousins could have a tough time getting through his reads. Either way, he’ll feel an urgency to get the ball to his playmakers in All-Pro receiver Justin Jefferson and Pro Bowl receiver Adam Thielen. If Cousins gets pressured and forces a few throws, Green Bay will be ready to capitalize.

Related: The story of Rasul Douglas in 2021 is the stuff of legends

Aaron Jones and A.J. Dillon will combine for 200 scrimmage yards

Aaron Jones and A.J. Dillon both recorded over 1,100 scrimmage yards last season. Jones is the only other running back besides Derrick Henry to record 40 total touchdowns and over 4,000 scrimmage yards over the last three seasons. Yet, Dillon led the team in rushing last year.

These guys are part of arguably the best backfield duo in the game. With some young receivers on offense, Packers head coach Matt LaFleur will look to lean on the ground game and those same running backs in the passing game too. Jones and Dillon should have a massive game on Sunday.