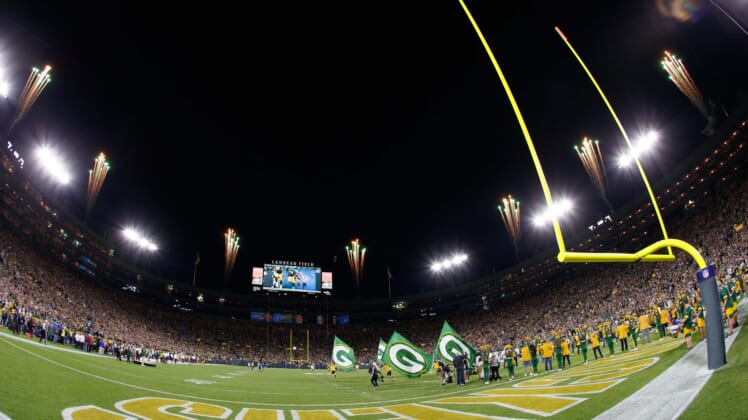 The Green Bay Packers have wanted to host the NFL Draft for years, targeting the marquee event on the NFL offseason calendar as an opportunity to showcase Green Bay, Wisconsin at Lambeau Field. Fortunately, that shot might finally be coming.

Green Bay finished as a finalist to host the 2024 NFL Draft, ultimately losing it to Detroit. While it was an unfortunate outcome, efforts are still being made to host a future draft. It’s not just about being part of a significant NFL moment either.

According to Fox 11 News, Green Bay’s visitors’ bureau estimates the statewide economic impact of hosting an NFL Draft is approximately $90 million. With stadium renovations and future expansion of the Titletown District still in the plans, the money could make a huge difference.

For die-hard football fans in Wisconsin and millions in the Midwest who want to attend an NFL Draft, Yahoo Sports’ NFL insider Charles Robinson said on the You Pod to Win the Game that Green Bay is ‘probably’ going to host the 2025 NFL Draft.

“Green Bay probably…We’ll see if it ends up being Green Bay, but it’s probably going to be Green Bay.”

The NFL hosts its annual draft for years in New York City, before moving it to Chicago (2015-’16). Since relocating the draft, it’s rotated around marquee cities and stadiums as part of the league’s efforts to generate even more excitement.

While the weather is certainly a factor the NFL considers, it didn’t prevent Kansas City or Detroit from being selected. While there is no set date for the 2025 NFL Draft, it would likely be in the last week of April.

While Lambeau Field isn’t hosting the draft anytime soon, the Green Bay Packers stadium will be welcoming two of the best soccer teams this year.

On May 2, The Packers announced that Lambeau Field will host an exhibition match between FC Bayern Munich and Manchester City, two of the top European soccer clubs. It’s part of the FCB’s Audi Summer Tour, expanding soccer’s reach in the United States.

The USA Cup will be held on Saturday, July 23 at Lambeau Field and it will be the first-ever professional soccer game played in the stadium’s history.

Tickets for the match become available on Friday, May 6 at 10 a.m. CDT. It’s also not the only marquee matchup headed to Lambeau Field.

In 2026, the iconic NFL stadium will host a matchup between Wisconsin and Notre Dame. The matchup was originally scheduled for 2020 but was rescheduled due to conference-only games because of the COVID-19 pandemic.