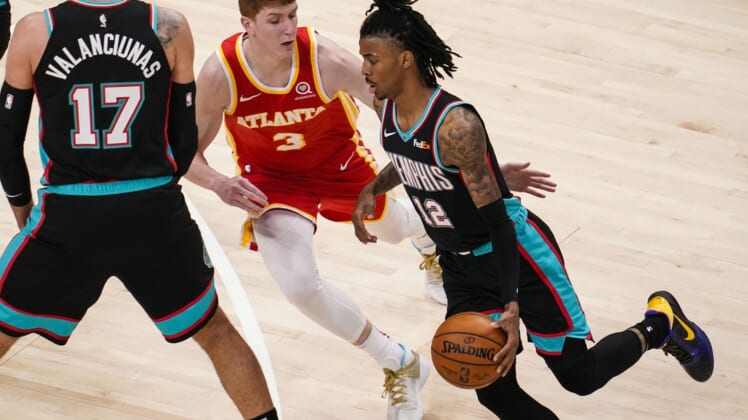 Grayson Allen poured in a season-high 30 points to help the Memphis Grizzlies roll to a 131-113 victory over the host Atlanta Hawks on Wednesday night.

Bogdan Bogandovic scored 24 points and Trae Young 14 points and 11 assists for the Hawks, who had a four-game winning streak snapped.

Tyus Jones had 10 points for the Grizzlies, who shot 53.9 percent from the field and hit 17 of 40 from 3-point range. Memphis held a 54-42 rebounding advantage.

Atlanta shot 44.6 percent from the field and made 10 of 28 from behind the arc while dropping to 13-5 under interim coach Nate McMillan.

Memphis trailed by as many as 14 in the first quarter but recovered to hold a 67-64 halftime edge. Brooks had 14 points at the break.

The Grizzlies dominated the third quarter, outscoring Atlanta 43-23 and knocking down 17 of 26 field-goal attempts. The sustained flurry led McMillan to use three timeouts in a 4 1/2-minute span.
Allen made two 3-pointers in a 40-second stretch to give Memphis an 89-75 with 6:01 left and force Atlanta’s second timeout of the stanza.

The message apparently wasn’t deciphered as Allen hit another 3-pointer and added a layup in a 16-second span. Anderson then stole the ball and tossed it off the glass to set up Morant for a ferocious dunk to make it 96-75 with 4:52 left, causing McMillan to signal for another timeout.

Later in the stanza, Morant and Brooks knocked down back-to-back 3-pointers to increase the lead to 109-83 with two minutes left.

Memphis led 110-87 entering the final quarter, but the Hawks moved within 123-106 on Bogdanovic’s three-point play with 5:07 remaining.

Anderson and Morant followed with 3-pointers to push the margin back to 23, and the Grizzlies cleared the bench to finish off the convincing triumph.