Gradey Dick’s late surge leads No. 6 Kansas past No. 7 Duke 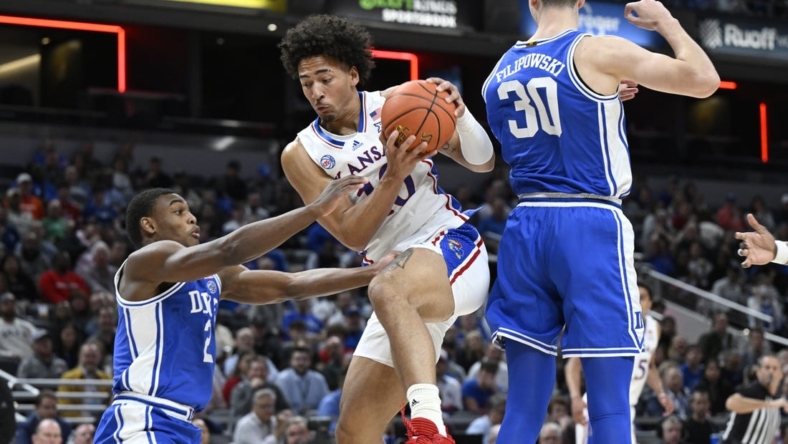 Jalen Wilson scored 25 points and grabbed 11 rebounds and Gradey Dick hit three consecutive baskets down the stretch to lead No. 6 Kansas past No. 7 Duke 69-64 in the nightcap of the Champions Classic that ended early Wednesday morning in Indianapolis.

Dick scored seven consecutive Kansas points in a 78-second span, first giving the Jayhawks (3-0) a 61-59 lead on a 3-pointer with 2:22 left. After Jeremy Roach stuck a 3-pointer to give the Blue Devils (2-1) their last lead, Dick jammed on an alley-oop feed, then converted a tough driving layup to make it 65-62.

Wilson, who also dished out five assists, clinched the outcome by hitting both ends of a one-and-one with 9.2 seconds remaining. Dick finished with 14 points, and Texas Tech transfer Kevin McCullar Jr. added 12 for Kansas.

Freshman forward Kyle Filipowski finished with 17 points and a game-high 14 rebounds for Duke, but he made just 6 of 18 shots, including 1 of 6 from 3-point range. Roach added 16 points while playing the full 40 minutes, but he hit only 6 of 17 field-goal attempts.

Kansas made 46.3 percent of its field-goal tries while the Blue Devils managed just 35.8 percent accuracy, but Duke dominated the boards 46-35, grabbing 21 offensive rebounds.

After Duke scored the game’s first two buckets, the Jayhawks rattled off a 17-2 run to grab an early double-figure lead. Wilson and McCullar combined for a dozen points during the surge, Wilson capping it with a stick-back.

Offensive fouls plagued the Blue Devils throughout the first half. They were whistled for six of them among their 11 turnovers. However, the Jayhawks were sloppy themselves with 10 first-half miscues and Duke eventually worked its way into contention.

Roach’s three-point play with 3:39 left in the half pulled the Blue Devils within 27-25. Kansas regained a six-point lead in the final two minutes on a dunk by Zuby Ejiofor, but Roach hit two foul shots in the last minute to make it 33-29 at intermission.