Gradey Dick shines in debut as No. 5 Kansas crushes Omaha 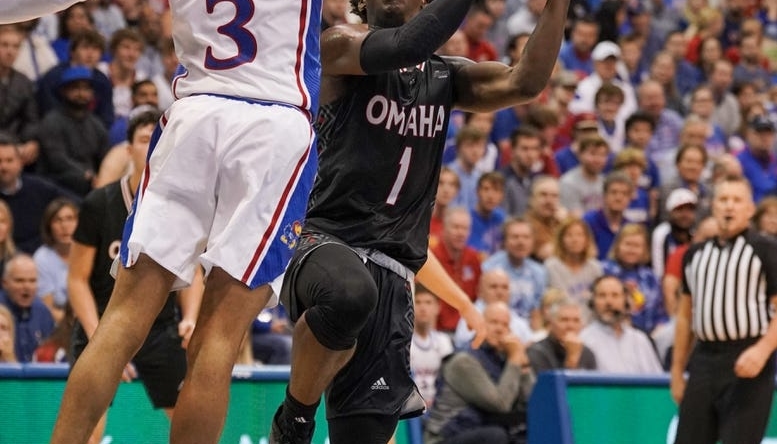 Freshman Gradey Dick scored 23 points as No. 5 Kansas outlasted Omaha 89-64 for a season-opening win in Lawrence, Kan., on Monday as the Jayhawks began their national-title defense.

Dick, a 6-foot-8 guard from Wichita, Kan., shot 9 of 13 from the field and made 4 of 6 attempts from behind the arc. His scoring total was the highest by a Jayhawk in his debut since Xavier Henry had 27 points in 2009.

Jaeden Marshall led Omaha with 13 points, while Marquel Sutton and Frankie Fidler each had 11 points. Luke Jungers added 12 points and six boards off the bench.

Kansas played its season opener without coach Bill Self, who is serving a four-game suspension imposed by the university. The punishment stemmed from the FBI’s investigation into corruption in men’s college basketball. Assistant coach Kurtis Townsend is suspended, too. Norm Roberts slid into the lead chair on the bench in Self’s absence.

Omaha led 7-5 early in the first half after a pair of free throws by Sutton. The Jayhawks then broke off a 16-3 run, a stretch in which Wilson had five points and an assist. At halftime, Kansas was up by 13.

Omaha threatened at the start of the second half, beginning it with an 10-4 run, trimming Kansas’ lead to 50-43. J.J. White had three assists for the Mavericks in that stretch.

The Jayhawks never squandered the lead, though, and with 3:18 to play built their largest edge of the day at 26 points, punctuated by a Wilson dime to McCullar for a layup. That final run for Kansas also included a breakaway tomahawk jam by Dick.

Next up for Kansas is a home game against North Dakota State on Thursday. Omaha travels to Lincoln to face Nebraska on Thursday.