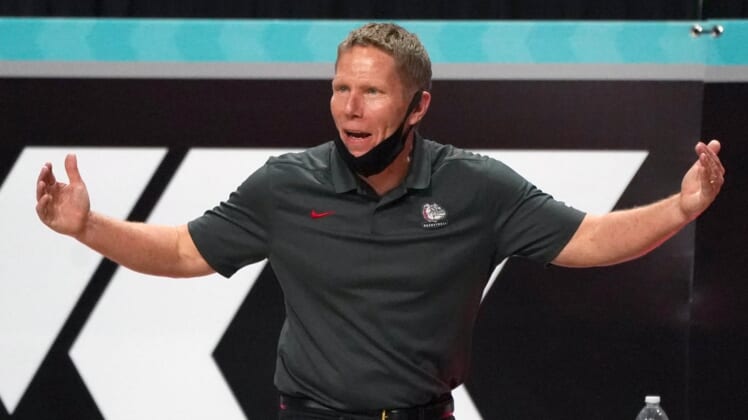 Mark Few of undefeated and top-ranked Gonzaga is one of four finalists for the Naismith Coach of the Year Award, the Atlanta Tipoff Club announced Wednesday.

The other finalists are Scott Drew of No. 3 Baylor, Juwan Howard of No. 4 Michigan and Nate Oats of No. 5 Alabama.

The winner will be announced April 2.

“We’re fortunate to have advanced to this point of the season, given the challenges brought on by the global pandemic, and it’s been remarkable to see the coaches prepare their teams for a tournament run,” said Eric Oberman, executive director of the Atlanta Tipoff Club. “All college coaches should be acknowledged for their guidance and leadership this season, but these four in particular have been remarkable and certainly worthy of consideration to win the Werner Ladder Naismith Coach of the Year award.”

Few has won at least 25 games in 14 consecutive seasons and Gonzaga stands 26-0 entering the NCAA Tournament. He won the award in 2017 when the Bulldogs advanced to the national championship game before losing to North Carolina.

Drew led Baylor (22-2) of the Big 12 to its first regular-season title since sharing the Southwest Conference title in 1950.

Howard excelled with a 19-3 record in his second season at Michigan after once starring for the school as a player on the “Fab Five” teams of the early 1990s.

Gonzaga, Baylor and Michigan are No. 1 seeds for the NCAA Tournament. Alabama is a No. 2 seed.