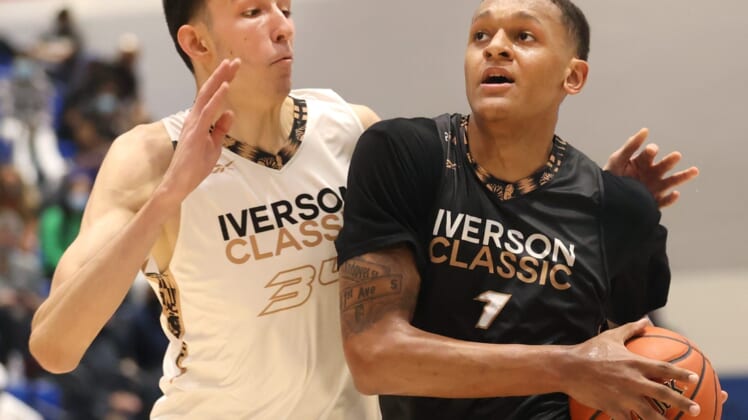 Chet Holmgren defends Paolo Banchero on a drive during the Iverson Classic All-American Game at Bartlett High School on Saturday, May 8, 2021.A37i5072

Gonzaga signee Chet Holmgren on Wednesday was named the 2020-21 Gatorade National Player of the Year for high school boys basketball.

The 7-foot Holmgren learned he was the winner when his former high school teammate and former Gonzaga star Jalen Suggs told him during a virtual announcement in front of a gathering of family and friends in Minneapolis.

“It’s definitely a huge honor to win such a prestigious award,” Holmgren said.

Holmgren previously won the Naismith Prep Player of the Year Award, among other honors.

Suggs left Gonzaga after one season to enter the NBA draft but has been on teams with Holmgren since early in elementary school.

“Offensively, he’s a threat anywhere above halfcourt,” Suggs said of Holmgren. “He’s got a great shot that’s hard to block, hard to contest because he’s so tall. Great midrange. I think he’s going to show off this year.”

Gonzaga is expected to be the preseason No. 1, with Holmgren joining a cast that includes holdover star Drew Timme. The Bulldogs lost to Baylor in last season’s national championship game.