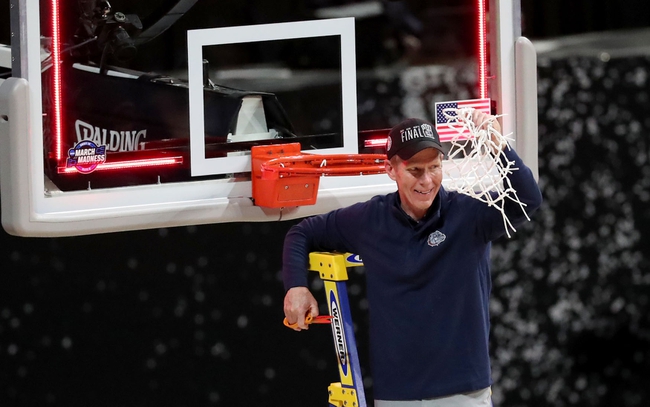 Gonzaga head coach Mark Few cuts down the net after defeating USC during the Elite Eight round of the 2021 NCAA Tournament on Tuesday, March 30, 2021, at Lucas Oil Stadium in Indianapolis, Ind. Mandatory Credit: Kelly Wilkinson/IndyStar via USA TODAY Sports

Gonzaga coach Mark Few was named winner of the Naismith Coach of the Year award on Friday, the Atlanta Tipoff Club announced.

It is the second time Few has won the honor. He also received the award in 2017.

Few has guided Gonzaga to a 30-0 record heading into the Final Four. The top-ranked Bulldogs meet UCLA in Saturday’s national semifinals.

“The Werner Ladder Naismith Coach of the Year is an incredible honor,” Few said in a statement. “I’m very humbled by it because I’m surrounded by so many amazing coaches in our profession that I look up to and really hold in great reverence. Especially with the year we all have been through, I think everybody did an amazing job shepherding their teams through all the challenges. This really means a lot. It’s great to be honored, and I appreciate it.”

Gonzaga’s powerful season includes a Division-I record 27 consecutive wins by double digits. The Bulldogs are attempting to become the first team to go unbeaten since Indiana in 1976.