Gonzaga star Drew Timme announced Wednesday he is returning for his junior season in 2021-22.

The 6-foot-10 forward averaged 19.0 points, 7.0 rebounds and 2.3 assists in 32 starts last season as the Bulldogs (31-1) went undefeated before losing to Baylor in the NCAA Tournament final.

“I appreciate everything I’ve learned so far from the Gonzaga coaching staff, and look forward to growing my game once more,” Timme said in a statement released by the school. “I love playing at GU, being a part of the program, and can’t wait to play in front of the best fans in the country again.

“After reviewing my options with my family, I’ve decided to return to Gonzaga. I am excited to come back to Spokane and continue my collegiate career.”

Timme made the 2020-21 All-West Coast Conference first team and earned the Karl Malone Award as the nation’s top power forward. He was a second-team All-American by the Associated Press, NABC and USBWA, and was also named the NCAA Tournament West Regional’s Most Outstanding Player. 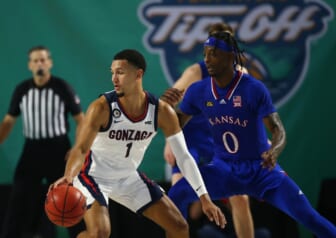