Justin Thomas poured in seven birdies to card his second consecutive round of 65 and take a one-stroke lead at the halfway point of the Zozo Championship... 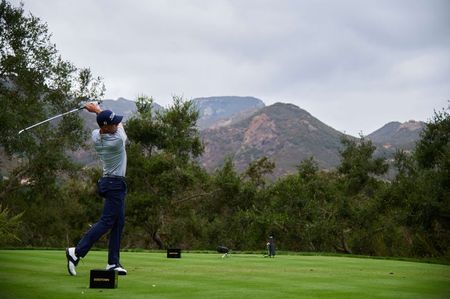 (Reuters) – Justin Thomas poured in seven birdies to card his second consecutive round of 65 and take a one-stroke lead at the halfway point of the Zozo Championship at the Sherwood Country Club on Friday.

The world number three was hot out of the gate, with four birdies over his first five holes en route to a bogey-free round that left him 14-under 130 heading into the weekend.

“I played well,” said Thomas, who is gunning for his 14th win on the PGA Tour.

“I’m not very pleased with the finish. The last six holes I would have liked to at least have got something.”

Low scores once again prevailed at the course in Thousand Oaks, California, where the tournament is being held instead of Japan due to logistical issues caused by the COVID-19 pandemic.

“It’s short and the greens are soft right now. So obviously if they get firmer and they tuck the pins a little bit more, it is going to be harder and the scores will be higher.”

Thomas enjoys a one-stroke lead over fellow American Lanto Griffin, who was the co-leader before suffering a bogey on his final hole, and South African Dylan Frittelli. Both men are 13-under 131.

Patrick Cantlay and Scottie Scheffler lurk one stroke further back with eight players tied at 11-under including Tony Finau, who is making his first start since testing positive for COVID-19 earlier this month.

Tiger Woods bounced back from a horrible opening round 76 to card a 66 on Friday.

Despite eight birdies and two bogeys, the 44-year-old was tied for 66th and his hopes for a record 83rd PGA Tour title will have to wait for another day.

The 77-player field has no cut and will be the last event for many of the players before the rescheduled Masters from Nov. 12-15.