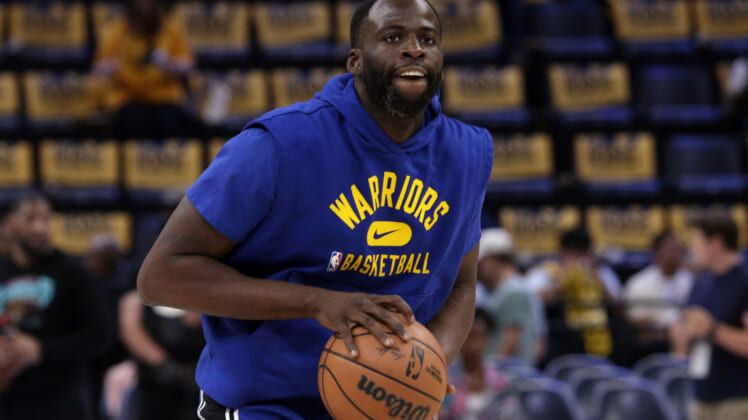 Golden State Warriors star Draymond Green had an exchange with the Memphis Grizzlies crowd that is sure to get him a fine from the NBA and he is completely fine with it.

On Tuesday night, the Memphis Grizzlies evened their best-of-seven Western Conference semifinals series with the Warriors at 1-1, with a 106-101 win at home. The biggest takeaway for most will be the unbelievable performance put up by young superstar Ja Morant, as he dropped 47 points and nearly earned a triple-double in the victory.

However, overshadowed in the afterglow of Memphis’ win is an incident between the always feisty Draymond Green and the Grizzlies fans in attendance. Early in the first quarter of last night’s game, Green took a hard elbow to the face from center Xavier Tillman. The shot left the four-time All-Star lying on the court in pain and bleeding from a cut opened up on the side of his face.

It seems the reaction from the crowd incensed Green as he walked to the locker room to receive medical attention, and the 32-year-old let fans know about his dissatisfaction by throwing up double middle-fingers to the Grizzlies faithful.

Draymond Green on flipping off crowd: ‘If they gonna be that nasty I can be nasty too’

Green was asked about the moment during his post-game press conference. And he let the media know he did not regret his gesture, will gladly accept the eventual fine from the league, and admitted the moment actually made him feel good.

“You gonna boo somebody who gets elbowed in the eye, face running down [with] blood, you should get flipped off,” Green said after the game. “So I’ll take the fine. I’ll go do an appearance and make up the money. But it felt really good to flip them off … I could have had a concussion or anything. So if they gonna be that nasty I can be nasty too. And I’m assuming the cheers were because they know I’ll get fined. Great, I make $25 million a year, I should be just fine.”

Game 3 of the Golden State Warriors versus the Memphis Grizzlies takes place on Saturday night in California.