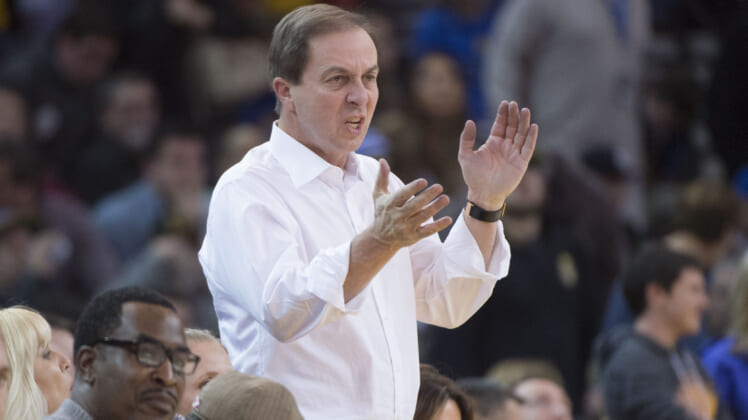 Golden State Warriors owner Joe Lacob has never been afraid to provide an opinion on what’s happening around the NBA.

It was during the 2021-22 regular season that Lacob was fined for “tampering” with then-Philadelphia 76ers star Ben Simmons in indicating that his team had no interest in the embattled guard prior to a trade to the Brooklyn Nets.

With his Warriors up 2-0 in their first-round playoff series against the Denver Nuggets following two blowout wins, Lacob opened up about the status of the team. In the process, the highly-respected owner seemingly put a couple unnamed rival teams on blast over recent trades for veteran players.

“There are a couple teams, I’m not going to say who, there’s some other teams that went all-in on older players. And older players do get injured. That’s the thing you have to remember. Suppose we had made a trade, traded away all our youth, for I don’t know, you name the guy, and they’re injured, out for the year. Anytime you’re over 30, 32, 35, these people get injured. It’s data.”

Lacob didn’t want to further a rift with rival franchises by naming the specific teams he’s talking about here. But it’s not hard to read between the lines.

The three-time champion owner is likely talking about the 76ers trading the aforementioned Simmons in a package for 32-year-old former NBA MVP James Harden. Harden missed 17 games to injury during the regular season and put up his worst statistical performance since all the way back in 2011-12 when he was starring with Kevin Durant and Russell Westbrook in Oklahoma City.

Speaking of Westbrook, it also wouldn’t be a surprise if Lacob threw shade in the direction of the rival Los Angeles Lakers. As you already now, Los Angeles finished up shop on an ugly 49-loss regular season. Westbrook is as good as gone after one disastrous season in Southern California.

Is Golden State Warriors owner right to call out other teams?

There was a lot made of the Warriors’ unwillingness to trade youngsters for a star player last summer and leading up to the February 10 NBA trade deadline. This lack of activity actually didn’t sit well with one veteran member of the organization.

Fast forward a couple months, and the Warriors are now betting favorites to win the NBA title three years removed from their dynastic run. This, despite the fact that Golden State’s veteran players missed a whole lot of action during the regular season.

In fact, the trio of Thompson, Green and Curry played together for all of 11 minutes during the regular season.

So, why are the Warriors considered the favorite to come out on top? As the always-talkative Lacob said, it’s about the young core in San Francisco.

Related: Jordan Poole party and the Warriors’ return to dominance

There’s some merit to this. At just 22 years old, Jordan Poole is entering stardom. The guard is averaging 29.5 points on 59% shooting from distance in the first two games of the Nuggets series. The former first-round pick also averaged a resounding 25.4 points on 43% shooting from three-point range in the final 20 regular-season games.

Rookie lottery pick Jonathan Kuminga has not been in the rotation during the playoffs. But the dude looks to be an absolute star in the making. At 19, the forward averaged 12.9 points and 4.4 rebounds in his final 31 regular-season appearances.

For the Warriors, it’s about walking the fine line between short-term championship contention and long-term relevance. That’s what Lacob is speaking to.