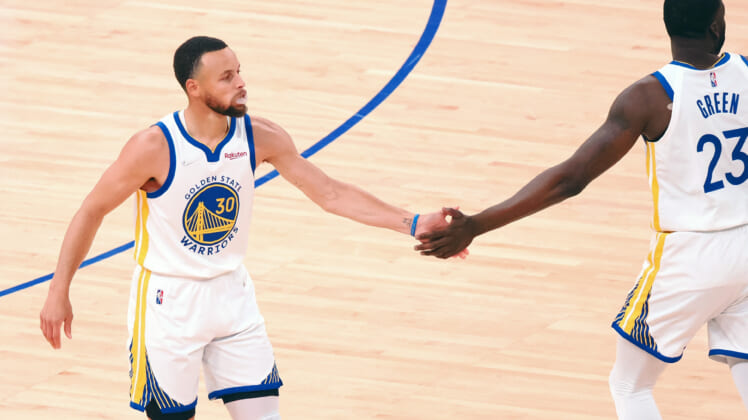 Even when it appeared the Dallas Mavericks had control of Game 2, the Golden State Warriors showed they were battle-tested, using a mix of their star power in addition to surprisingly strong efforts from unlikely contributors such as Kevon Looney.

After the Mavericks led the way for three quarters, the Warriors came out with a 43-point fourth quarter, putting forth their best-shooting quarter of the season. In doing so, they shot 15-of-19 for an incredibly efficient showing.

There were several takeaways to talk about from the Warriors’ nine-point victory, I’ve chosen four of the biggest stories from Friday’s game, providing a recap down below.

A rumor going around prior to the game suggested Luka Doncic might be terribly sick. I don’t think this qualifies for a classic Michael Jordan flu game performance or anything, but Doncic looked confident and cool from start to finish.

For the record, Doncic was reportedly feeling ill after Game 1, but his head coach, Jason Kidd said his star guard was “fine” before the game tipped off.

Aside from Andrew Wiggins going at Doncic early, the Slovenian superstar made things look easy from the start. By the end of the first quarter, Doncic already put up 18 points in the box score. The Warriors had just 25 points on the team, and Doncic’s teammates had 13.

Despite leading the game with 42 points, Doncic couldn’t do it all.

He’s only one person, and despite a 31-point effort from backcourt partner Jalen Brunson, the Mavs just couldn’t match wits with the Warriors. Getting only 13 points from the bench compared to 36 from the Warriors’ side puts too much pressure on Doncic and Co. Get this man some help.

Like he was in Game 1, Andrew Wiggins continued to be aggressive and was a big reason the Warriors kept up with the Mavs early on. The former No. 1 overall pick had a respectable 12 points at halftime, he worked his butt off on defense, but we didn’t see much production from the inconsistent wing in the second half.

Wiggins would go on to score just four points the rest of the way, but finishing with five rebounds, five assists, in addition to a steal and a block is nice to see. In the end, his team won, and that’s all that he cares about.

Just as it appeared the Mavericks would crush the Warriors, as the game got into the latter portion of the night when players’ stamina is tested, it was the home team who stepped up in numerous ways.

Jordan Poole, well, was his usual self, chipping in 23 points, shooting an impeccable 70% from the field, finishing with the best plus/minus on the squad. It was a complete effort, and if it continues, there’s nobody who can beat the Warriors.

Warriors proving to be too much for Mavericks

Despite being down 19 points, the Warriors didn’t give in. They’ve been here before. It didn’t matter that Doncic was at his best, the experienced team never got flustered on their home court.

After two games, the Warriors appear to be too much of a matchup for the Mavericks. Granted, they’ve had home-court advantage in both of their games thus far, with Game 3 headed back to Dallas, but the Mavs have shown little to suggest they are the better team thus far.

Doncic may be one of the top-10 players in basketball, but the Warriors have three, possibly even four of the best five players in this series and we’re seeing that play out so far.