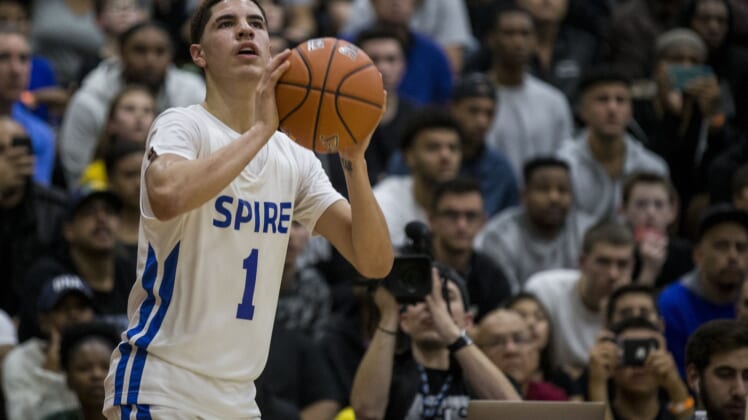 Now that the 2020 NBA Draft is officially slated to start in October after it was delayed due to the ongoing COVID-19 pandemic, we’re going to start hearing rumors and seeing mock drafts.

The draft itself will likely be held virtually. The lottery results won’t be known until August. But at least one team has shown its hand. The Golden State Warriors have reportedly met with top prospects LaMelo Ball and James Wiseman via Zoom. They’ll also meet with both in person ahead of the draft this coming fall.

This is interesting for a number of different reasons.

As of right now, the five-time defending Western Conference champs join two other teams with the best odds to land the No. 1 pick in the 2020 NBA Draft. Warriors general manager Bob Myers has noted that the team would be willing to trade down. Given the draft is seen as weak, it’s unlikely he’ll trade outside of the top five.

Ball wouldn’t necessarily be a need pick in that Golden State still boasts the Splash Brothers, Stephen Curry and Klay Thompson. More than anything, he’d be a luxury selection. The 6-foot-7 sensation can play all three perimeter positions, backing up Curry, Thompson and Andrew Wiggins in the process. He also has tremendous range and is the best pure passer in the draft.

On the other hand, Wiseman is more of a need. Golden State has only former Suns lottery pick and cast off Marquese Chriss as a starter-caliber center. What’s even more interesting here is that previous rumors suggested that the Warriors were not high on either Ball or Wiseman.

Boasting the worst record in the NBA at 15-50, some might think a once mighty Warriors roster has lost some of its luster. That’s until we realize Thompson did not play a single game this season with a torn ACL. Curry suited up in a total of five games.

More than anything, Golden State saw young players step up and play well in their stead. The above-mentioned Chriss combined with the likes of Eric Paschall and Damion Lee to paint a pretty bright future for the Warriors’ young group.

With this in mind, there’s a good chance Golden State will look to move the first pick should it win the lottery. The idea of adding other veteran pieces via a combination of that selection and the $17.2 million trade exception created in the Andre Iguodala trade could be too hard for the Warriors to pass up on. If not, Ball becomes a real option.