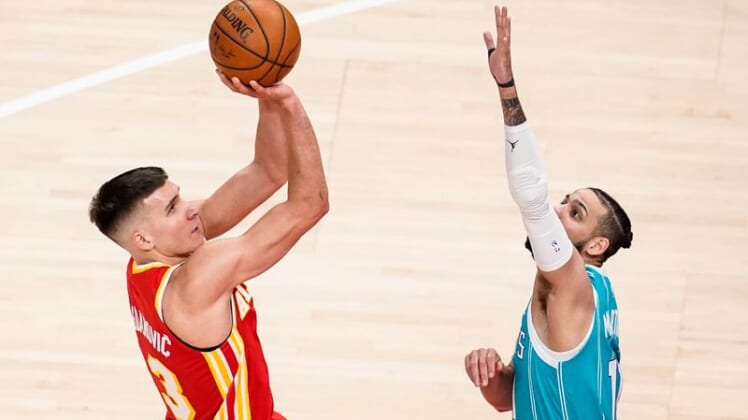 The Golden State Warriors are apparently looking to make some type of move ahead of the NBA trade deadline Thursday afternoon. Currently sitting at 22-21 on the season, they are the ninth seed in the Western Conference.

There’s also a pretty big backdrop to all of this. Golden State needs to find Stephen Curry more help with Klay Thompson being lost to injury for a second consecutive season.

Meanwhile, three-and-D wing Kelly Oubre is slated to become a free agent during the summer. He’s picked it up big time recently and could be highly-coveted on the open market. This has led to speculation that Oubre could be dealt within the next few days. If so, fellow wing Bogdan Bogdanovic of the Atlanta Hawks could make sense.

Shams Charania of The Athletic reported Monday that the Golden State Warriors are interested in acquiring the veteran sharpshooter from the Atlanta Hawks.

Signed to a four-year, $72 million free-agent deal this past offseason, Bogdanovic does not seem to be a great fit in Atlanta. It’s led to NBA rumors pointing in the direction of a potential trade.

The 28-year-old wing is averaging 9.5 points, 3.4 rebounds and 2.3 assists on 39% shooting from the field. He suffered a knee injury back in January and is just now returning to form. Remember, the Serbian native averaged 14.6 points on 37% shooting from distance in his final two seasons with the Sacramento Kings before moving on to Atlanta.

Would Bogdan Bogdanovic be a fit with the Golden State Warriors

The simple answer to this question would be yes. He could slide in at the two-guard position next to Stephen Curry while splitting time with impressive youngster Jordan Poole until Klay Thompson returns next season. From there, Bogdanovic would likely slide into a Sixth Man role. His scoring is something the Warriors could use off the bench.

As for a Warriors team that’s over the luxury tax, moving Oubre and change to Atlanta for Bogdanovic would actually work from a financial standpoint. They’d also have him locked up for the next three seasons.

It’s something Golden State’s brass is thinking about behind the scenes. Trade in Oubre’s expiring contract for a player under team control over the next few seasons. It’s why the Warriors have been linked to the likes of Aaron Gordon and Lonzo Ball in recent weeks.

The only question here is whether the Golden State Warriors want to use the Oubre asset for someone of Bogdanovic’s ilk. He’s not seen as a game-changer in the grand scheme of things. Rather, the wing would be a nice secondary option behind Curry, Thompson and Andrew Wiggins moving forward.

As it is, Golden State is one of the teams expected to be active ahead of the NBA trade deadline later this week. That could include pulling off a trade for Bogdan Bogdanovic.