Golden Knights Have Chance for Decisive Series Lead in Game 4 vs. Wild 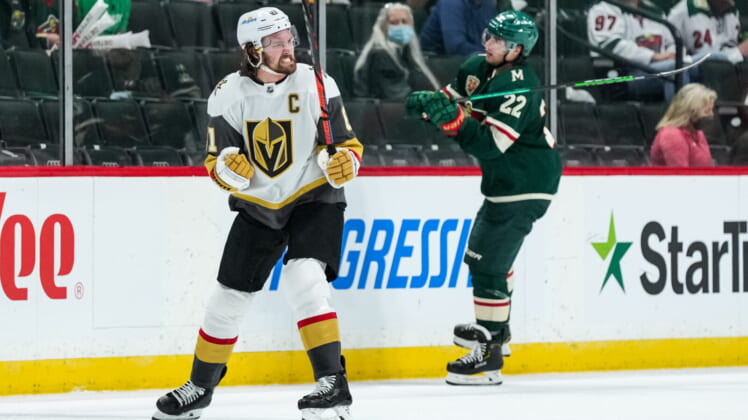 After a big comeback victory in Game 3, the Vegas Golden Knights look to push the Wild to the brink of elimination. If they fail to win tonight, the series will go back to Vegas with each team tied at two games apiece.

While every playoff game is crucial, certain just carry more weight. Game 4 of the first-round series between the Vegas Golden Knights and Minnesota Wild is one of those games as it will have serious implications on the atmosphere and momentum when the two teams return to Las Vegas on Monday.

Will the Golden Knights be heading home only one win away from advancing to the next round? Or will the Wild pull out Game 4, making this series a best-of-three where they would need to steal just one game on the road?

This game has a very similar feeling to Game 2 of this series – one the Golden Knights needed to win, or they risked dropping both games at home and falling behind 2-0. The Golden Knights responded with a big 3-1 victory and now that the roles have reversed, the question is if the Wild can do the same?

The Wild have dominated the first period before the Golden Knights found their legs and took control of the game for two straight games. For Vegas, the challenge will be putting together a strong 60 minutes of play – something we have yet to see from them in this series. While they may be able to get away with lapses in concentration against the Wild, and even that is not guaranteed as this series could very easily be in Minnesota’s favor at the moment, they will not be able to do so in future rounds. The Colorado Avalanche is looming in the other West Divison series, and they have looked dominant thus far.

Ironically, the only game that the Golden Knights started strong in was Game 1, their only loss of the series thus far. Still, a weak start in Game 3 almost cost them a chance at victory and if it weren’t for a Minnesota goal that was overturned because of an offsides challenge, the slow starts of the Golden Knights would be a much larger storyline.

There is no doubt that the Wild are going to come out flying tonight, frustrated that they gave away Game 3 and feeling the home-ice energy. It will be up to coach Peter DeBoer and the veteran leadership team on the Golden Knights to make sure they can match that energy and not have another brutal first period.

Marc-Andre Fleury, winner of three Stanley Cups, has played exceptionally well through the first few games of the series. Robin Lehner, who has assumed the backup role thus far in the playoffs, also got plenty of starts during the regular season and played well.

If the Golden Knights can secure a decisive victory in Game 4, coach Peter DeBoer might have an interesting decision on his hands. He could start Lehner for Game Five, allowing the goalie to get some action in the playoffs and stay warm. This way, if he ever wanted to go back to a platoon as they used for long stretches in the regular season, Lehner would be warm instead of being a few weeks removed from facing NHL competition.

However, it’s also the NHL Playoffs and even a 3-1 lead may not be enough for DeBoer to be confident in going away from Fleury. Will he decide to diversify his options by giving Lehner a look or will he solidify Fleury as the man going forward, only time will tell.

When it comes to the NHL Playoffs, every advantage a team can get is to be welcomed. For the Golden Knights, something that must be considered is the fact that if they do beat the Wild, they face off against the President’s Trophy winning Colorado Avalanche. That series would pit the two best teams against each other and would be one that the Golden Knights would need to be prepared for.

The Avalanche are up 3-0 in their series and will likely finish off the St Louis Blues sooner than later. This means that they will get to rest for a long time before starting the second round. The Golden Knights are taking part in a very physical series at the moment and could use some rest before facing off against Colorado, if they advance that far.

With players like Tomas Nosek already ruled out due to injury, and many others surely nursing smaller health issues, getting a few extra days of rest would allow them to heal before playing in the second round. Thus, the Golden Knights cannot afford to let this series against the Wild go seven games and take the battering that comes with that. Taking a 3-1 lead with a win tonight is the first step in working towards that potential advantage.

The game starts at 5 PM PDT tonight. Game Five will take place back in Vegas on Monday at 7:30 PM.