3 Players That Will Decide Golden Knights vs Wild Game Three 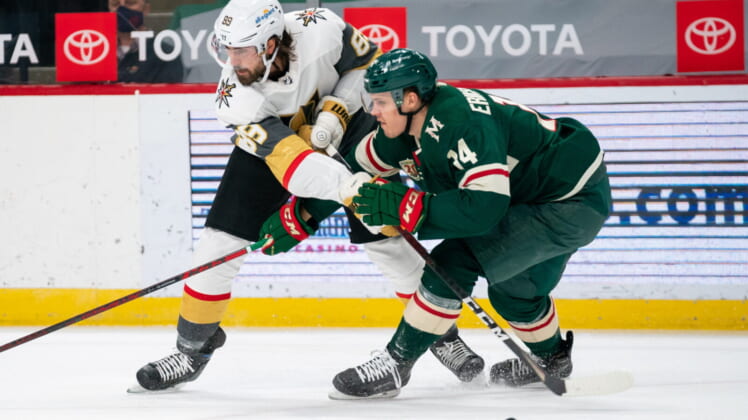 Tonight, the Golden Knights and Wild face off in a critical Game 3. It’s going to be the play of a few key players that decide the result of the game.

With the series tied at one game apiece, tonight’s Game 3 of the series between the Vegas Golden Knights and Minnesota Wild is crucial in deciding who wins this opening series of the 2021 Stanley Cup Playoffs.

There’s plenty riding on the game tonight and tensions are sure to be high as two physical teams battle it out. The first two games have both been low-scoring affairs with few mistakes but there are enough goal scorers on each team that any game could turn into a shootout.

For tonight’s crucial contest, there are three players that are going to play large roles. The play of these three players is going to determine which team ends up winning the game, and which team will soon be fighting for their lives.

Many times in recent years the Golden Knights have dominated the shot count yet not been able to score. Tuch mentioned before Game Two that they may have been too easy on Wild goalie Cam Talbot and been sacrificing quality for quantity.

He responded in Game Three by scoring two goals that were both right in front of the net. Tuch has a deadly combination of size and speed that is hard to contain and if his play can rub off on his teammates then we might see the dam burst for the Golden Knights offense.

The big Minnesota center has played a large role through the first two games. He scored the overtime winner in Game One and has been a part of the Wild’s best line along with Jordan Greenway and Marcus Foligno. These three are all-powerful players that use their size and speed to play a North-South style of hockey that is very effective in the playoffs.

If Eriksson Ek can continue to be a strong two-way force that gives the Golden Knights major issues, the Wild will have a solid chance of winning the game. If this one goes Minnesota’s way, don’t be surprised if this line is a big reason why.

The Minnesota Wild have been able to focus on shutting down Stone because linemate Max Pacioretty continues to miss time with an injury. Pacioretty is a game-time decision for the game tonight, but no matter his status the Golden Knights need to do a better job at freeing up Stone.

He’s their captain and one of their deadliest offensive players, yet he only has recorded one shot through the first two games. This is not to say that Stone is playing badly as he is one of the best defensive forwards in the league and can impact the game without touching the scoresheet, but freeing him up offensively would be a huge boost for a struggling Vegas offense.