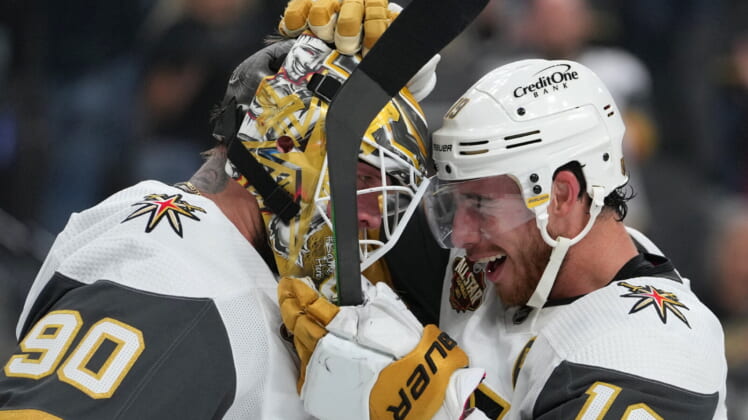 The Vegas Golden Knights continue to roll as they defeated the Anaheim Ducks by a score of 5-4 on Friday night. This was the third consecutive win for the Golden Knights who are making a run up the Pacific division standings after an early-season losing streak.

Evgenii Dadonov scored the shootout winner tonight after scoring the overtime winner last game. He is proving to be a huge offseason addition and has stepped his game up while other big offensive contributors are out due to injury.

This was a story of two different games for the Golden Knights as they were the aggressors in the first period before allowing the Ducks back into the contest. Their intense energy was noticeable right off the bat as they put the pressure on and had multiple scoring chances in the first few minutes of play.

They finished the first period with 10 high-danger scoring chances at 5-on-5 compared to only three for the Ducks. However, late-game mistakes made this one closer than it should’ve been as it had to eventually be decided in a shootout.

“It was a crime we weren’t up by more than one early,” said head coach Peter DeBoer.

This result reflected the two vastly different expectations of each team heading into this season. The Ducks are in the midst of a rebuild and have several young players who would still be considered prospects on the Golden Knights. On the other hand, the Golden Knights are expected to contend for the Stanley Cup.

John Gibson was the only reason that the Golden Knights managed to keep this game close. He came up with a few huge stops that allowed the Ducks to remain within striking distance and his efforts were eventually rewarded as the Ducks tied the game late in the third period. He was the reason that the Ducks earned a point in this game and continues to solidify his place among the league’s best goaltenders.

While the Golden Knights had a dominant start to the game, they allowed the Ducks to climb back into this one late and risked two points that should’ve been theirs. They led by three goals at one point and the game seemed to be in their hands, yet a weak effort over the last forty minutes allowed the Ducks to even things and escape with a point. Giving a division rival an unnecessary point is never a good thing and that’s exactly what the Golden Knights did tonight.

The game-tying goal was made possible because of a huge mistake by goalie Lehner. A shot was put on net and Lehner reached out to catch it with his glove, instead deflecting it into his net. After replay reviews, it’s clear that the puck was going wide and that Lehner pushed it back towards the goal. Despite that weak goal, Lehner came up big at other points of the game including during the shootout where he only let one goal in.

Even though it wasn’t pretty, at the end of the day the Golden Knights still came away with two points. While allowing a weaker team to come back and make things interesting isn’t ideal, it’s not the worst thing in the world when you still win the game and there are always going to be games like this in any season.

“That was a huge week for us. We were looking at a potentially disastrous start, as opposed to just a bad start.” commented DeBoer.

Reilly Smith is one of the only players left from the original Golden Knights team and has grown to be one of the team’s iconic players. Ever since the Golden Knights went on their early season skid, he’s been one of the players that has stepped up and spoke out about how the team needed to be better. Since then, his play has been excellent and he was great once again tonight.

He scored the opening goal of the game after following up his own partial breakaway attempt. Besides that goal, he impacted the game in a variety of ways and was one of the most dangerous players on the ice, constantly moving into open space and creating scoring chances.

Smith finished the game with the most individual expected goals of any Golden Knights player at 5-on-5 by a large margin. Also at 5-on-5 he had four shots, good for second on the team, and had four individual high-danger scoring chances which was two more than anyone else. His play tonight was huge for a team that is still missing a good portion of their top-nine forwards.

Friday was Nevada Day, which many people across the state celebrated. Both the Golden Knights and their AHL affiliate the Henderson Silver Knights each had their own special jerseys. The Golden Knights wore their jersey during warmup before they were auctioned off.

The Silver Knights wore their special “Nevada Day” jerseys for the entirety of their game. Special pucks and locker nameplates were also given away before tonight’s NHL contest that celebrated Nevada Day for the Golden Knights.

The Golden Knights play their next game on Tuesday against the Toronto Maple Leafs. The puck drops for that game at 4 p.m. Pacific time. It’ll be a good game against another team that has one of the league’s best collections of talent.