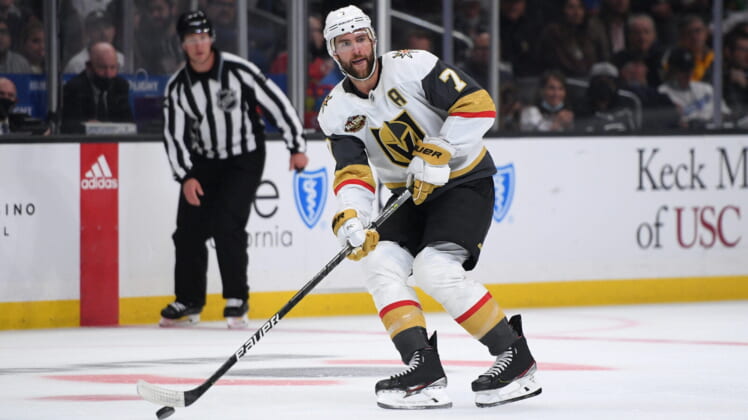 The Vegas Golden Knights (1-1-0) are playing host to the St Louis Blues (2-0-0) with a roster that will be missing several significant pieces. Both Mark Stone and Max Pacioretty will be absent due to injury, leaving the Golden Knights with only one-third of their first line available.

The Blues will also be shorthanded after forward Pavel Buchnevich was suspended for two games for an incident where he headbutted Arizona Coyotes forward Lawson Crouse. This game will mark the start of his suspension with the second game to be served during the Blues home opener on Saturday night against the Los Angeles Kings.

The Golden Knights season may depend on how they do during this stretch without their star players. They can’t afford to dig themselves a large hole as division rivals such as the Edmonton Oilers have already gotten off to hot starts.

Head coach Peter DeBoer provided an update on captain Mark Stone’s injury earlier today. He confirmed that Stone will not need to have surgery and described his status as somewhere in-between day-to-day and week-to-week. This is encouraging news for the Golden Knights as initially, it seemed as if the injury might have been much more serious.

Without Stone or Pacioretty in the lineup tonight, first-line center Chandler Stephenson will need to adapt to a new set of wingers. If the morning skate was any indicator, it will be Evgenii Dadonov and Nicolas Roy that will get the first shot in those positions. That’s a steep talent drop-off from the usual but the even larger effect may come from the trickledown effect that will leave the Golden Knights with a much weaker bottom-six than normal.

This will also be a great opportunity for Dadonov to make an impact as a Golden Knight and reward management for bringing him in this summer. With a cap hit of $5 million, he is expected to contribute offensively and without Stone and Pacioretty a larger portion of the load falls on his shoulders.

The Blues have scored twelve goals over their first two games as they’ve been blessed with scoring from multiple lines. The 2019 Stanley Cup champions feature a mix of respected veterans and exciting young talent and the Golden Knights will need to focus on a few key players if they want a chance at victory. Jordan Kyrou is someone who has had a hot start to the season with two goals and four assists through the first two games.

The Blues also have Jordan Binnington in net, the goaltender that seems likely to represent Canada at the upcoming Winter Olympic Games. During his short career thus far, Binnington has gone through stretches where he has been absolutely dominant. However, he has also had his fair share of struggles and has allowed seven goals through his first two starts this year.

For Alex Pietrangelo, this game will mark a matchup against his former team. Pietrangelo played on the Blues for a decade and was the captain before the Golden Knights acquired him in free agency. While captain, he helped lead the Blues to their franchise’s first Stanley Cup victory.

The puck drops tonight at 7 PM Pacific Time at T-Mobile Arena in Las Vegas, Nevada. The Golden Knights are favored with odds of -125 at Caesars Sportsbook.