Golden Knights meet Kraken amid ‘final push for the playoffs’ 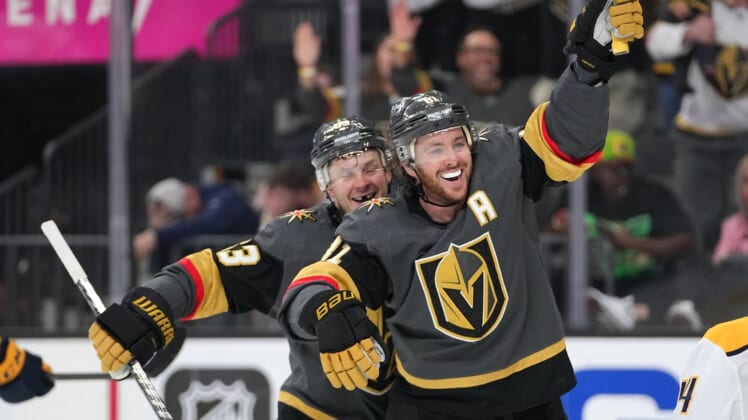 Sometimes, it is the trades that are not made that end up being the most beneficial.

Or in this case, the trades that are voided.

Vegas’ Evgenii Dadonov has scored in each of the two games since the deal that would have sent him to Anaheim was negated by the NHL because of his no-trade clause.

Dadonov will look to add to that total when the Golden Knights play Wednesday night at Seattle.

Dadonov had a goal and two assists last Thursday in a 6-1 victory against Nashville, then scored in overtime as the Golden Knights overcame a three-goal deficit in the third period to defeat Chicago 5-4 Saturday.

“I felt that support from the stands,” Dadonov said. “Probably pumped me up even more. I always loved playing here, even when I was coming (from) Florida (to) here. Great experience playing here in front of this crowd. Still think it’s the best fans in the league.”

Dadonov has scored in each of the past four games and has six goals and nine points over the past six games for Vegas, which is battling for a playoff berth in the Western Conference.

Dadonov seems to want to put the aborted trade behind him.

“Like I said last time, it was a stressful couple of days. We should stop talking about it,” he said. “All I’m thinking about is helping the team make the final push for the playoffs.”

Saturday marked the first time in franchise history the Golden Knights won after trailing by at least three goals in the third period.

“I think we were running on some fumes (Saturday), all night, and the guys just dug deep in the third,” Vegas coach Peter DeBoer said. “They recognize the importance of the moment, and in the third, our best guys grabbed it and dragged us back into the game.”

Goaltender Logan Thompson stopped 30 shots for Vegas, which got a boost from the return of defenseman Alec Martinez. He missed 53 games after suffering a facial injury Nov. 11 when struck by the skate blade of Minnesota’s Brandon Duhaime.

The Kraken, who made several moves at the trade deadline, have gotten a boost from the two players they acquired.

Daniel Sprong has scored in all three of his games with Seattle since coming over from Washington, and Victor Rask, acquired from Minnesota, also tallied in Monday’s 6-1 victory at Los Angeles.

The Kraken have won three out of their past four games to move out of the Western Conference cellar.

“We just looked like a complete hockey team out there (Monday),” said Seattle goaltender Chris Driedger, who made 36 saves. “It’s great to see those guys come together. Tons of communication, tons of energy, and seems like we were just sick of losing.”