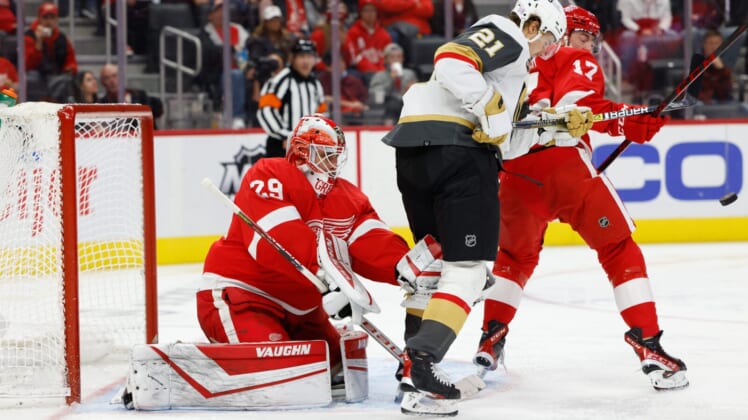 The Vegas Golden Knights lose 5-2 against the Detroit Red Wings on Sunday to concluded their eastern road trip. This loss meant that they managed to secure four of a possible eight points, a middling result for a Golden Knights team that’s just trying to tread water at the moment.

Backup goalie Laurent Brossoit got the start Sunday after starter Robin Lehner played Saturday and it wasn’t his best performance as the Red Wings scored from a few sharp angles.

The Golden Knights started the game off strong, putting the pressure on the Red Wings from the moment the puck was dropped. After the first period, the Golden Knights held the advantage in several significant statistical categories at 5-on-5, including scoring chances, expected goals and Corsi percentage.

“When you go .500 on a road trip, it’s just OK,” said forward Jonathan Marchessault postgame, “It could’ve been a great road trip if we won tonight.”

Golden Knights lose as special teams continue to be an issue

The Golden Knights have struggled to score on the power play this season and have yet to find a solution to this issue. While they didn’t score on their three attempts Sunday, that wasn’t even the worst performance on special teams. The turning point of the game happened in the first period when the Red Wings scored twice in a two minute stretch with both goals coming on the power play.

While it’s hard to pinpoint exactly where things went wrong, both Reilly Smith and Alec Martinez were on the ice for both goals against. It didn’t help that Brossoit wasn’t having his best game tonight and wasn’t there to bail them out as they might have been by Lehner or Fleury in the past.

It wasn’t Brossoit’s finest performance, though he did have to deal with a few penalty killing situations early on in the game. NaturalStatTrick credited Brossoit with saving 9 of the 11 high-danger chances he faced, while also allowing another goal on a medium danger opportunity and one goal on a low-danger opportunity.

With how good Lehner has been playing recently, it can be easy to forget how much a good goaltender can hide a bad team’s faults. On Sunday, some of those issues were exposed and the team didn’t have the extraordinary goaltending to carry them to victory.

The Golden Knights will need better goaltending if they want to go on a winning streak during this upcoming home stand. It remains to be seen how many of those starts will go to Lehner and how many will go to Brossoit, but either way they’re going to need to get back to their exceptional ways to propel this team to victory.

There were a few players tonight that had great games for the Golden Knights. Nicolas Roy managed to chip in a goal and an assist and he was the only Golden Knights player that had a multi-point night. He also led all Golden Knights skaters in expected goals with 0.77 in all situations.

The Golden Knights play their next game on Tuesday against the Seattle Kraken. The puck drops for that game at 7 p.m. Pacific Time and it will be the second time these two teams have played. The Golden Knights won the first matchup that happened on opening night.