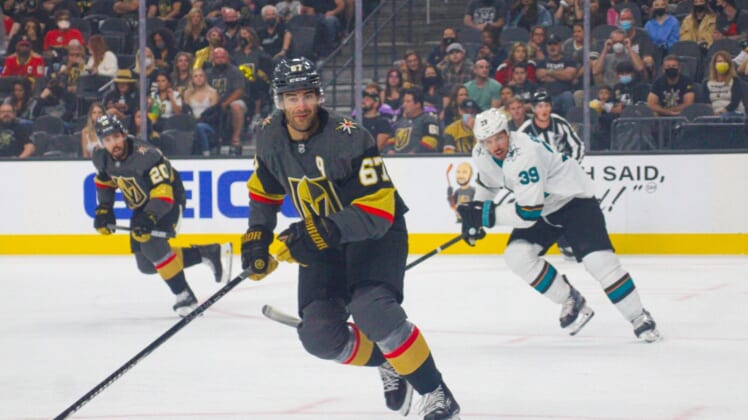 The Vegas Golden Knights started their quest to be the 2022 Stanley Cup champions with a preseason matchup against San Jose Sharks’ division rival. The Golden Knights ended up falling 4-2 to the Sharks in a game that served as an opportunity for veterans to get their legs loose while the players on the bubble fight for the final few roster spots.

The goal scorers for the Golden Knights included sniper Max Pacioretty and Paul Cotter, a fourth-round pick of the Golden Knights who played last season for the Henderson Silver Knights in the AHL. While they came up short of victory, the focus in these games isn’t as much on winning so much as getting back into the flow of things.

Mark Stone did leave the game early and it has since been reported that he received stitches on the side of his head. Stone will likely not feature heavily in the upcoming preseason games as they ensure he is in good health for the regular-season opener.

The Golden Knights made some major offseason moves to get over the hump and win a Stanley Cup. This game offered the first look at a few new players in a Golden Knights jersey and the early returns were promising. Nolan Patrick and Evgenii Dadonov were some of the major additions that played against the Sharks.

Patrick ended the night with one shot-on-goal and one assist, while Dadonov was held off the scoresheet despite two shots of his own. The two will hope to ignite a Golden Knights’ powerplay that has gone through long dry spells, including during last year’s playoff run.

Despite not scoring, Dadonov did have a few good chances and looked dangerous the entire night. It’s easy to imagine him finding his form from Florida, where he was a dangerous goal-scorer beside better linemates.

The next time that the Golden Knights take the ice will be on September 28th. They will face off against the Colorado Avalanche in a preview of what figures to be many intense battles between the two teams this season. They are the two titans of the Western Conference and had a hard-fought playoff series last year.

While the two teams are sure to take things light during this preseason game, there is bad blood between the two franchises and they are the odds on favorites to meet in the Western Conference finals. It will be interesting to see how much ice time head coach Peter DeBoer plans to give to his best players, such as Mark Stone.