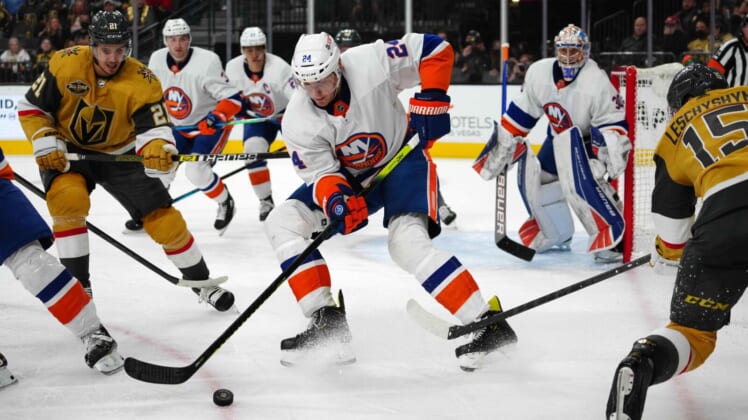 The Vegas Golden Knights continued their rough start to the 2021-22 NHL season with a 2-0 loss to the New York Islanders on home ice Sunday night at T-Mobile Arena.

The Golden Knights fell into the Islanders trap as they allowed an early goal and then were unable to score when New York tightened their defensive structure. It’s been a winning formula for the Islanders as they are known as one of the best defensive teams in the league.

Vegas sits at the bottom of the Pacific Division, a spot they aren’t familiar with as they have been successful ever since entering the NHL. While the season is a marathon and not a sprint, the Golden Knights are doing a great job of digging themselves a huge hole that could come back to bite them later.

“It sucks losing. No one likes it,” said goalie Robin Lehner after the game. “This is a bit of adversity and good teams dig themselves out.”

It was another missed opportunity for the Golden Knights, who were playing an Islanders team on a back-to-back. The Islanders even played the same goalie that they did last night, a move that is pretty rare in today’s NHL as most coaches opt to give their goalies a rest.

Things are going to need to turn themselves around quickly, or the Golden Knights will be in trouble. That journey continues on Tuesday when they travel to Colorado to take on the mighty Avalanche.

Battle of the netminders

The stars of this game were the goalies on either side as they shut down almost all of the scoring chances. There was plenty of acrobatic saves, good rebound control, and solid positioning on display tonight at both ends of the rink. For goalie nerds, this game was a masterpiece.

This was Sorokin’s second start in as many nights and one might assume that he would show some signs of fatigue, especially as the game wore on. That would turn out to be a false assumption as he continued to cosplay as a brick wall, repeatedly shutting the Golden Knights down. He was outstanding during the second period when he stopped all eight of the high-danger chances he faced at 5-on-5.

The Golden Knights offense let them down tonight in what’s become a trend throughout the early part of this season. Understandably, they would struggle to score without sniper Max Pacioretty and offensive stars Mark Stone and Alex Tuch, but they’re going to need to stop making excuses and put the puck in the back of the net if they want to win games.

It’s not a desirable position to be in, but there’s nothing the Golden Knights can do until their players return. In the meantime, they need players like William Karlsson and Peyton Krebs to step up and create some offense.

Of course, one thing that would help them put goals up on the scoreboard would be a working power play. That unit once again didn’t score tonight and they have yet to connect this season. If they could even create an average power play, that would be huge for their offensive attack.

When the second period wrapped itself up twenty minutes later, the story had been completely flipped. The Golden Knights pushed hard and they controlled the play during this period. They had all eight of the high-danger scoring chances that were had during this period as they tested Sorokin over and over again. Despite their dominance, they left this period without a goal. This felt like a turning point in the game as the Golden Knights threw everything they had at the Islanders and it still wasn’t enough to put one past Sorokin.

The Islanders tightened things up defensively during the third period as they attempted to hold onto their one-goal lead. When Mathew Barzal got a prime opportunity after a Golden Knights defensive zone turnover, he made no mistake and doubled the deficit. From there, the Islanders did what they do best and slowed the game down to a point where the Golden Knights couldn’t get going.