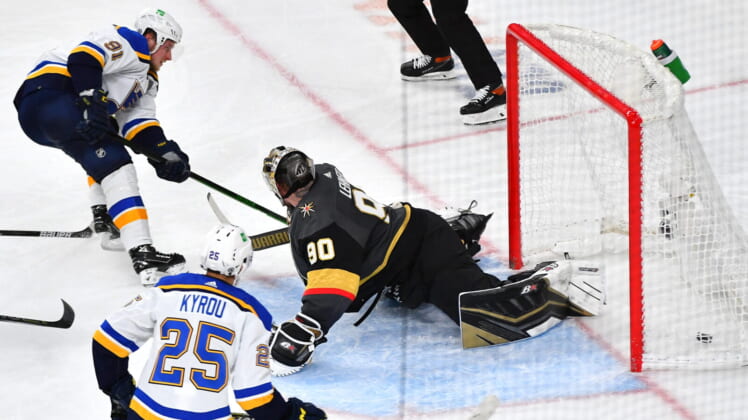 The Vegas Golden Knights played host to the St Louis Blues on Thursday night in what was an exciting back-and-forth affair, and despite the low number of goals in the game, it was a miscue that defined the night on the Las Vegas Strip. The Golden Knights committed a costly late turnover leading to a 3-1 loss to St. Louis at T-Mobile Arena.

With over 80 shots combined from the two teams, this game could have easily finished with many more goals. It was a true goaltending duel as the two netminders trading highlight save after highlight save.

The Golden Knights were clearly missing their two injured stars in Max Pacioretty and captain Mark Stone. Without them, their forward group looked much more pedestrian as Evgenii Dadonov and Nicolas Roy didn’t have even close to the same impact on the top line. The lone Golden Knights goal was scored by the “Misfits Line” early in the game, though after that Blues’ goalie Jordan Binnington shut things down.

The Golden Knights now turn their attention to Friday night when they will face off against the Edmonton Oilers. The Oilers may be the Golden Knights biggest competition for the Pacific Division crown and they have gotten off to a much stronger start than the Golden Knights. This game will be big to see who is the favorite to win the division.

Marc-Andre Fleury’s offseason departure left some massive shoes for Robin Lehner to fill, and before tonight his performance had allowed for plenty of questions as to if he was up to the task. Tonight, Lehner didn’t allow anyone to question his competence as he was clearly the Golden Knight’s best player from start to finish.

He made several massive saves throughout the night that kept the Golden Knights in the game. No matter if he was facing a shot through traffic, a dangerous scoring chance from the slot, or a partial breakaway, Lehner was always up to the challenge. The Golden Knights continually gave up great chances but Lehner always seemed to have the answer.

“I think we gave up 10 grade-A chances in the first period,” said forward Reilly Smith, “and that should be the number for the whole game.”

When the Blues finally did score in the third period to break the 1-1 tie, it was on a 3-on-0 rush where Lehner was left out to dry by his defense after a brutal turnover by Alex Pietrangelo. It was a tough position to be put in for Lehner as he was having such an amazing game, he just couldn’t get the help he needed from his teammates. Despite that disappointment, tonight’s performance was his best of the season and a great way to build some momentum.

The key moment of tonight’s game came in the third period when Pietrangelo tried to throw a blind pass across the neutral zone. It was intercepted and the Blues quickly transitioned the other way where they found themselves rewarded with a 3-on-0. Lehner was left helpless as he watched all three Blues players touch the puck before it ended up in the back of the net.

Despite the costly turnover, Pietrangelo actually had a solid game and was very noticeable for long stretches. He was active offensively as he would pinch in the offensive zone and he even rang a shot off the post at one point.

While the one bad play shouldn’t completely ruin Pietrangelo’s night, it’s definitely a decision that will keep him up tonight.

The absence of Stone and Pacioretty was painfully obvious from the time the puck was dropped but the Golden Knights cannot afford to wait around until they come back. They need to remain a strong team during this period of flux so that they aren’t trying to claw their way back into contention once fully healthy. Getting no points on a night like tonight is not going to cut it, especially with how Lehner played in net.

It’s still very early in the year and the panic meter is still right near the bottom, but there has to be some thought as to how bad this team might be without Stone and Pacioretty. Friday night’s game against Edmonton will be useful as a measuring stick to see how the Golden Knights stack up to one of the best teams in the division. There is a chance that they will be without Alec Martinez for that game as he left tonight’s contest and did not return. Head coach Peter DeBoer did not have an update after the game.