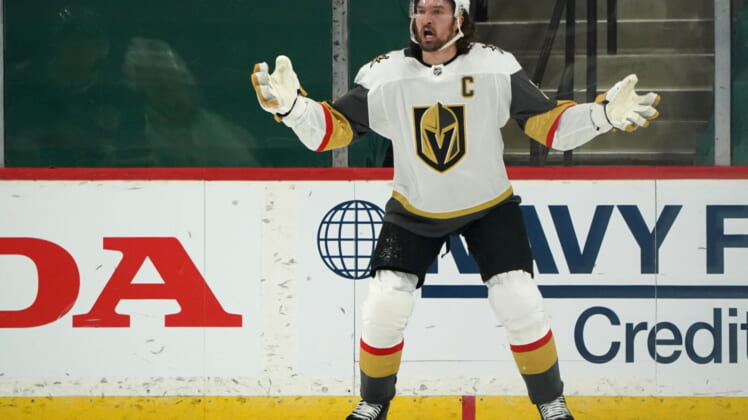 The series has returned to T-Mobile Arena on the famed Las Vegas Strip and the Vegas Golden Knights did very well in Minnesota, winning both games. Now they are at home with a chance to finish off the Wild and end the series.

A win tonight for the Vegas Golden Knights would mean four straight victories and a spot in the second round against the Colorado Avalanche. They traveled to Minnesota and won both games against the Wild. If they can get another win tonight, they won’t need to go back up north; instead, they would stay in Vegas to rest up in preparation for the Avalanche.

A win for the Wild would mean that they would put themselves back in this series and build a potential pathway to victory. Considering they have had two consecutive games where calls against them drastically changed the momentum, the Wild are sure to come out tonight with some fire. While the Golden Knights have a 3-1 series lead, the games have been decided by the thinnest of margins, and it could be much different.

Forward Max Pacioretty did not participate in the morning skate and will likely miss tonight’s game once again. This means that Alex Tuch will stay with the first line alongside Chandler Stephenson and Mark Stone, a fast and talented line. He will hopefully return to the lineup in the next series.

The Golden Knights return to T-Mobile Arena to play in front of their fans tonight. Compared to last season’s playoffs, it’s a completely different atmosphere as it’s expected that over 11,000 fans will pack the building. The noise and support should help Vegas in closing this series out.

“That’s an advantage for us for sure,” said head coach Peter DeBoer, “There’s no doubt we would love nothing more than to close them out in front of our crowd.”

The Golden Knights will welcome every advantage possible in their attempt to win tonight, and playing at home in front of a raucous crowd is a large one. With momentum being a large factor in playoff hockey, having the crowd’s support can sometimes be the difference between a win and a loss.

The fourth win is always the hardest one to get in any playoff series and the Golden Knights have plenty of work ahead of them to get it done. The Wild are a scrappy team that will not roll over and die. If Minnesota can win this game, the Golden Knights are playing a dangerous game as they will have to win Game 6 on the road or face a do-or-die game seven with all of the momentum against them.

As far as approach goes, leader Alex Pietrangelo stressed the importance of not changing what has been working.

“(It’s) the same recipe we’ve had for the last couple games here and a lot of game one.” commented defensemen Alex Pietrangelo, “There’s obviously a sense of desperation on their side so it’s important we get a good start.”

The same things that got the Golden Knights to this point are what they need to continue to do if they want to advance to the next round. With the Avalanche already done their series, the Golden Knights don’t want to spend too much time in a physical series against the Wild.