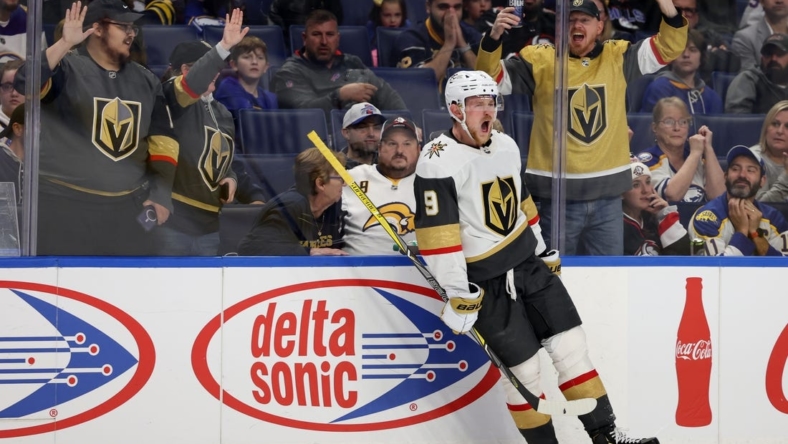 The Vegas Golden Knights can match their franchise-record 10-game winning streak when they open a three-game homestand on Saturday night against the St. Louis Blues in Las Vegas.

Vegas, which won 10 in a row in April of 2021, leads the NHL with 13 victories and 26 points in 15 games. The Golden Knights completed a sweep of a five-game eastern road trip on Thursday with their ninth straight win, a 7-4 victory at Buffalo, as Jack Eichel scored his third career hat trick and finished with four points.

It was Eichel’s second game at KeyBank Center since a Nov. 4, 2021 trade to the Golden Knights for Alex Tuch and Peyton Krebs. Eichel, who left on controversial terms with the Sabres who were against his decision to have eventual disc replacement surgery in his neck, was booed each time he touched the puck. Eichel made a point to acknowledge the crowd after each of his goals.

“It’s satisfying to come in here and win,” said Eichel, who has a team-best nine goals and 19 points. “I think that’s the most important thing for our group. They were desperate and they gave us everything that we could handle and we found ways to make the plays when we needed to.”

“No one likes to see a teammate get booed, right?” Vegas coach Bruce Cassidy added. “I’m going to say it as simple as I can. It hurts everybody, right, especially if you are a close-knit team. So we’re happy for him.”

After failing to make the playoffs for the first time in team history last season, Vegas heads home leading the NHL in both wins and points after one month of action.

“It’s pretty good,” captain Mark Stone said of the start. “Probably the best start of my career. We’ve had good health, great goaltending. The defense has been good. Jack’s kind of leading the way offensively, but if you look down the board so many guys are chipping in offensively. That’s why we’re a good team, I think, because we have depth scoring. We’ve got to go home and carry the momentum.”

Waiting for the Golden Knights is a St. Louis team that ended an eight-game losing streak with a 5-3 victory over visiting San Jose on Thursday. It was the team’s first win since a 2-0 blanking of Edmonton on Oct. 22.

Defenseman Calle Rosen scored the game-winner at 8:20 of the third period on a one-timer off a Robert Thomas pass. It was Rosen’s fourth career goal and first of the season.

“It was obviously a good (feeling), for sure,” St. Louis coach Craig Berube said of snapping the losing streak. “You lose as much as we have lately and it’s really not a good feeling. Got a win. It was a battle, but we got a win and did a lot of good things tonight.”

The Blues now hit the road for three games, the final two of which will be part of the team’s first-ever Mom’s Trip. Twenty-two mothers will join the Blues in Denver before the Monday night’s game with the defending Stanley Cup champion Colorado Avalanche and will then fly with the team to Chicago for Wednesday’s road trip finale. The mothers will attend morning skates, sit in on team meetings, ride on the team bus and also eat pregame meals with the squad.

“We’ve got a tough road trip coming up,” Thomas said. “Vegas, Colorado, Chicago — they’re all playing well. It’s a good time to go on a run.”