PREVIEW: Golden Knights need short memory and forwards to show up for Game 4 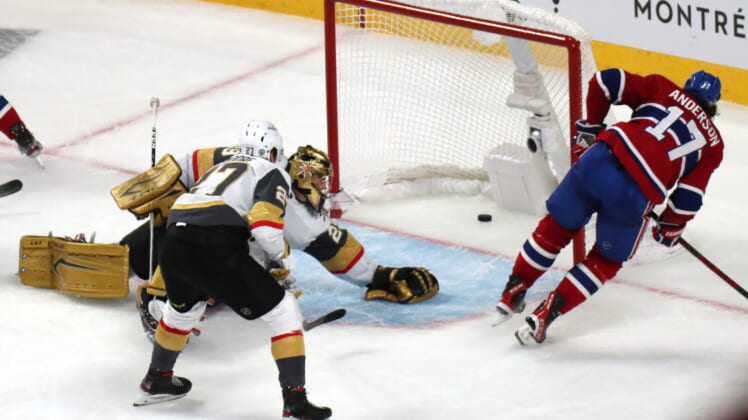 In the blink of an eye, this semi-finals series between the Vegas Golden Knights and Montreal Canadiens took a wild turn. The Golden Knights seemed as if they were about to cruise to a Game 3 victory, giving themselves the all-important win for the series lead. Instead, Marc-Andre Fleury bobbled a puck and the Canadiens came back to win the game in overtime, flipping the script.

They (Stone and Pacioretty) scored goals, played good defense, and overall had the type of impact you would expect from your first-line players. In this series, they have gone completely silent. They have no goals throughout this series and this has been a concerning development for a team that really needs scoring.

Now the Golden Knights are about to play a Game 4 that they must win if they want to split this pair of games in Montreal. Considering that the Canadiens managed to eke out a win on the road in Las Vegas, the Golden Knights must match them or face a 3-1 deficit that would be very difficult to recover.

The good news for the Golden Knights is that they have been the better team for a good part of this series, even if the scoreboard doesn’t show it. They controlled the vast majority of Game 3 and had a huge advantage in shots for the entire match, eventually finishing with 45 to the Canadiens 27. One small mistake was all it took for them to give that game away and it was another reminder that there is no margin for error in the NHL playoffs.

The Golden Knights have found a way to win all the big games thus far through these playoffs and they will need to tap into that energy again and pull out another one. The Canadiens will stick to their game plan of shutting things down and looking for opportunistic goals. The Golden Knights must combat that by playing fast to generate chances that are quality enough to beat Price.

It was a disappointing end to a game that the Golden Knights otherwise played pretty well in. Fleury mishandled the puck and it ended up in the back of the net – the second time this postseason, Fleury made a mistake that resulted in a goal.

Despite that, he has played well enough that there isn’t much of a chance he gives up the crease, even if Robin Lehner (the backup) is an excellent goalie. Fleury kept the Golden Knights in games that they should have been down bad during the first round against the Minnesota Wild and has been good in every game since.

One mistake doesn’t mean that it’s time to make any rash decisions. Fleury has won multiple Stanley Cups and knows that there are many ups and downs on the way there. He is a veteran that will likely enter tonight’s game locked in and ready to go because of his blunder in the last game.

Golden Knights missing: where are Stone and Pacioretty?

Mark Stone and Max Pacioretty were magnificent in the games they appeared in during the first two rounds. They scored goals, played good defense, and overall had the type of impact you would expect from your first-line players. In this series, they have gone completely silent.

They have no goals throughout this series and this has been a concerning development for a team that really needs scoring. The Canadiens have done a great job of taking away their opponent’s best players during these playoffs, take a look at Mitch Marner in Round 1, but the Golden Knights can’t let their opponent dictate their game.

They are clearly missing Chandler Stephenson and coach DeBoer’s plan to put Alex Tuch in between the two wingers didn’t result in any goals. It remains to be seen who will be the third player with these two tonight, but no matter who it is, they must find a way to put the puck in the back of the net.