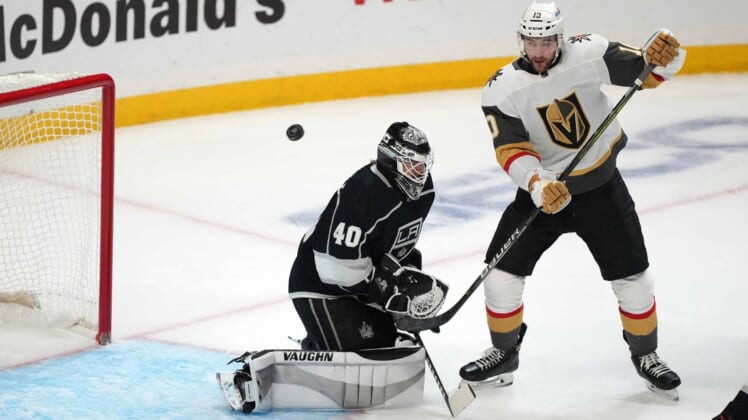 Alex Tuch scored the go-ahead goal on an end-to-end rush early in the third period as the Vegas Golden Knights rallied from a two-goal deficit to defeat the host Los Angeles Kings 4-2 Monday night.

Mark Stone had a goal and an assist and Nicolas Roy and Max Pacioretty also scored for the Golden Knights, who won their third consecutive game. Shea Theodore had two assists, and goaltender Robin Lehner made 26 saves.

The Golden Knights, who won 1-0 Sunday at home against the Arizona Coyotes, didn’t get their offense going until late in the second period.

With Los Angeles ahead 2-0, Roy got Vegas on the scoreboard at 14:20 of the period, skating down ice on a two-on-break and keeping the puck for a wrist shot past Petersen from the bottom of the right faceoff circle.

Stone scored a short-handed breakaway at 19:33 of the middle period to tie it at 2-2.

Tuch gave the Golden Knights the lead at 4:35 of the third. Following a Los Angeles rush, Tuch collected the puck in his own end and skated down the right wing, weaving through two defenders near the Kings’ blue line before beating Petersen with a high wrist shot inside the near post.

Vegas got some breathing room with Pacioretty’s power-play goal at 8:22 of the third. He scored on a snap shot from the top of the left faceoff circle as Stone provided a screen in front of the net. It was Pacioretty’s 300th career NHL goal.

Los Angeles’ Wagner opened the scoring at 9:41 of the first, beating Lehner on a breakaway.

Kopitar made it 2-0 at 8:57 of the second. He took a nifty pass from behind the net by Dustin Brown and put a one-timer past Lehner from the bottom of the left faceoff circle before the goalie had a chance to react.