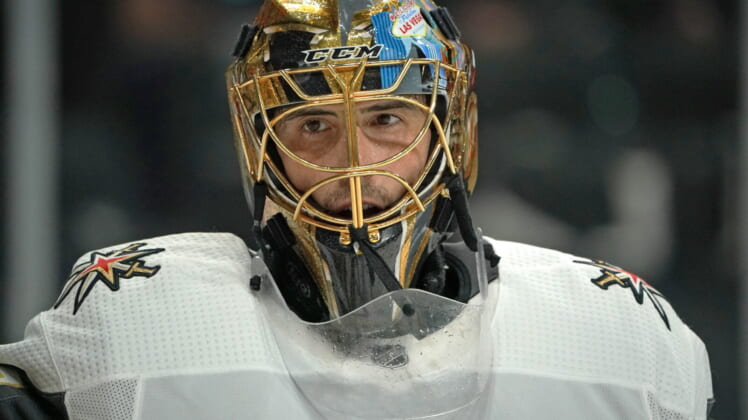 The official state flower of Nevada is the sagebrush but just ask any Golden Knights fan and they’ll tell you it’s really the team’s goaltender Marc-Andre Fleury who’s nickname is “The Flower.”

Fleury was named a finalist for the Vezina Trophy today, the team announced. The Vezina Trophy is awarded to the NHL’s top goaltender for the season. Along with Fleury, his opponent in the second round of the NHL playoffs Philipp Grubauer of the Avalanche and Andrei Vasilevskiy of the Tampa Bay Lightning were named finalists as well.

It marked the first time in his illustrious 17-year career that he has been named A Vezina Trophy finalist.

Fleury has a career resurgence at 36

It’s a worthy honor for the 17-year veteran who finished the 2020-21 regular season with a record of 26-10-0 posting a career-best .928 save percentage and a 1.98 goals-against average. Both of those ranked third overall in the NHL in 2020-21. Fleury also improved greatly over the 2019-20 campaign as his save percentage improvement was the best in the league.

The Golden Knights had a great year in goal as both Fleury and teammate Robin Lehner were winners of the William Jennings Trophy – the award given to the goalkeeper(s) who finished the season with the lowest goals-against total.

The Quebec native moved into third-place all-time with his 490th win vs. Minnesota on May 5 and notched his 66th career shutout on April 11, 2021, with a 1-0 win over Arizona.

Nevada’s favorite “flower” is expected to return to the crease Wednesday as the Golden Knights (0-1) face off in Game 2 of the second round of the NHL Stanley Cup Playoffs against the Colorado Avalanche (1-0).