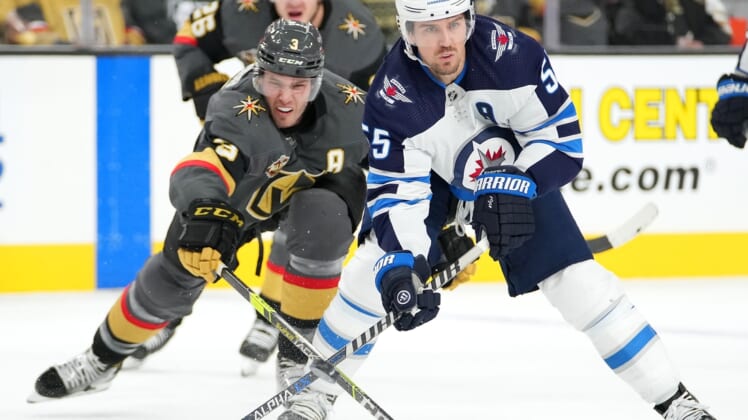 The Vegas Golden Knights will enter the finale of a five-game trip at Winnipeg on Tuesday night clinging to the second wild-card spot in the Western Conference and facing the possibility of missing the playoffs for the first time in the franchise’s five-year history.

The Golden Knights have lost the first four games of the trip, including 6-4 to the Columbus Blue Jackets on Sunday, their 10th loss in the last 14 games.

Vegas holds just a one-point lead over Dallas for the final playoff spot in the conference, but the Stars still have four games in hand.

This certainly isn’t what hockey fans in Las Vegas were expecting when the season began. The Knights entered the season as heavy favorites to win the Pacific Division and were ranked behind only Colorado at DraftKings Sportsbook along with Tampa Bay to win the Stanley Cup.

The good news for the Golden Knights is that they scored four goals in the loss to the Blue Jackets. That matched the total that Vegas scored in its first three losses on the trip at Philadelphia (2-1 score), Buffalo (3-1) and Pittsburgh (5-2).

“Good teams find ways to win all different kinds of games,” Knights coach Peter DeBoer said after Sunday’s loss. “You win 6-5, you win 2-1. You have to be able to do both of those things, and right now we can’t do either.

“We’re four games into this trip, and I could argue we could have won every one of the games, but we found ways to lose. And that’s troubling. We’ve got to stop the bleeding.”

Center Chandler Stephenson, who had two assists against Columbus, agreed.

“I’m sick of it. I think everybody is sick of it,” Stephenson said. “Everybody needs to dig deeper … and just work. That’s the bottom line.”

Winnipeg trails Vegas by just four points in the West playoff standings and has a game in hand. The Jets have won three of their last four games and are 5-3-2 over their last 10 games.

The Jets also will play six of their next seven games on home ice and come in off a momentum-building 4-3 overtime victory at St. Louis on Sunday.

Pierre-Luc Dubois scored the game-winner at 2:25 into OT on a one-timer from the right circle off a pass from Nikolaj Ehlers on a 2-on-1. Kyle Connor also scored a goal in his fourth straight game to give him 37 for the season and added two assists.

“A lot of these games to end the year, we have to win them,” Dubois said. “Whether it’s (St. Louis) or anybody else. We can’t lose many games. This one tonight, Tuesday against Vegas, every other game after that is going to be a big two points for us.”

Winnipeg opened the trip with a 2-1 victory at New Jersey on Thursday before dropping the second game of a back-to-back against the New York Islanders, 5-2.