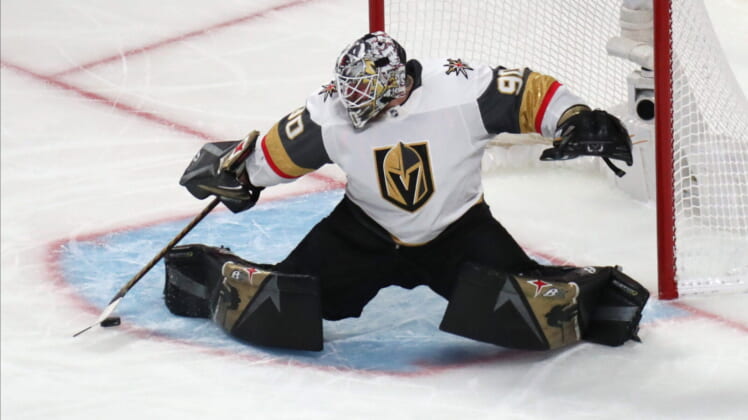 The NHL regular season is almost here (the Vegas Golden Knights open their season on Oct 12 against the Seattle Kraken), and fantasy hockey season comes along with it. Fans everywhere are looking for any edge they can gain on the rest of their league mates to ensure that they are the last ones standing.

While anyone can pick the superstars like Nathan Mackinnon or Connor McDavid, champions of these leagues are good at finding value players who outperform their average draft position (ADP). Finding these sleeper players is easier said than done and that’s why we’re here to help.

If you’re trying to get prepared for your fantasy hockey draft that’s coming up and you’re stumped as to who you should be targeting from the Golden Knights, let this article guide you towards a few players that might be the difference between a bottom place finish and a fantasy hockey championship.

After three straight seasons with at least 25 goals while playing for the Florida Panthers, Dadonov never got in rhythm while in Ottawa and finished last year with just 13 goals and seven assists over 55 games. The Golden Knights went out and traded for the Russian this offseason and he is expected to slot in their middle-six.

Dadonov has shown the ability to put the puck in the back of the net at the NHL level and he will get the chance to do that in Vegas alongside much better linemates than he had last season. He is also likely to see powerplay time which should help his points.

He’s currently being drafted around the same time as other forwards, such as former teammate Tim Stützle and Blackhawks’ forward Kirby Dach. Dadonov is the most proven of those options and has a high ceiling, making him a great value pick.

Alongside Jonathan Marchessault and William Karlsson, Reilly Smith makes up one-third of the Golden Knights’ signature “misfits line.” Those three players have been together since the franchise was created and it’s clear that head coach Peter DeBoer enjoys having them together.

While they bring a certain energy level, the line can also put the puck in the back of the net. Smith managed two 50+ point seasons in a row before regressing last year during the COVID-19 affected season. He is of great value at his position if he can return to his prior pace, which seems likely considering he’s only 30 years old and probably did not fall off a cliff last season.

Currently, Smith is being drafted just ahead of another former Golden Knight player: Ryan Reaves. There is no debate between these two players and if you have the choice, you have to go with Smith.

While this may seem like an unconventional choice since Stone is undoubtedly not a sleeper, the fact remains that his ADP is too low for the production that he brings to the table. He has been right around one point-per-game since he arrived in Vegas, even beating that mark last year over 55 games, and is now the first captain in franchise history.

Stone affects the game in so many aspects that he will always be getting plenty of ice time. If your league is more complicated than just rewarding points, Stone’s value will only increase because he does everything while he’s on the ice.

Other forwards around his ADP include players like Ryan O’Reilly and Tyler Seguin, who are both ahead of Stone. Those players come with many more question marks than the warrior Stone and will not outperform the Golden Knights’ captain this season.