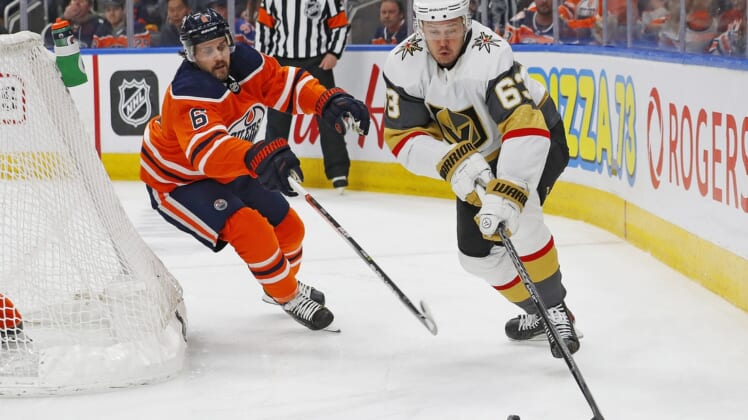 In each of their first four seasons, the Vegas Golden Knights qualified for the playoffs, and three times they advanced well beyond the first round.

An ill-timed two-week slump may keep the Golden Knights from reaching the postseason for the first time, so they are hoping to reverse their recent performances Monday night when they host the New Jersey Devils.

The Golden Knights (41-30-5, 87 points) won five straight from March 24-April 3 and went 7-2-0 in a nine-game stretch that followed a five-game losing streak from March 8-15. The winning streak put the Golden Knights into the second wild-card spot in the Western Conference, one point ahead of the Dallas Stars.

Since Shea Theodore scored the game-winning goal to give Vegas a 3-2 overtime win in Vancouver on April 3, the Golden Knights are 2-2-1 in their past five and head into their final six games four points behind the Stars, who have a game in hand and visit Vancouver on Monday.

“We got six games remaining. I don’t know how many we’re going to have to win, but it starts on Monday,” Vegas winger Mark Stone said. “We’ve got to get that one.”

During the slump, the Golden Knights own a pair of 6-1 wins, but they also own lopsided losses to Vancouver and the Edmonton Oilers. On Saturday afternoon, Vegas registered 39 shots on goal but took a 4-0 loss in Edmonton when it allowed three goals in the final period.

“We have to regroup,” Vegas coach Pete DeBoer said. “We’ve talked about this, we knew we weren’t going to run the table and we talked about two weeks ago, we were going to drop some points along the way, but we’re still right in the thick of things. We have to have a short memory and get ready for the next one.”

New Jersey (26-42-7, 59 points) is hoping to conclude a five-game road trip on a positive note. So far, the Devils are experiencing mixed results on the trip at 2-1-1.

The Devils opened the trip with wins over the Stars and Arizona Coyotes but are coming off losses in Colorado and Seattle. On Saturday, the Devils got a tying goal from Damon Severson early in the third but were unable to score in the shootout and dropped a 4-3 decision in Seattle.

Jesper Bratt scored for the third straight game to give him a career-high 25 goals and 70 points. Jesper Boqvist also scored, but the Devils went 0-for-3 on the power play, are 0-for-24 in their past nine games and 1-for-32 in their past 10 road contests.

Vegas leads the all-time series 5-1-1. The Golden Knights beat the Devils for the fourth straight time Dec. 16 in Newark, N.J., when 11 different players registered a point in a 5-3 victory.