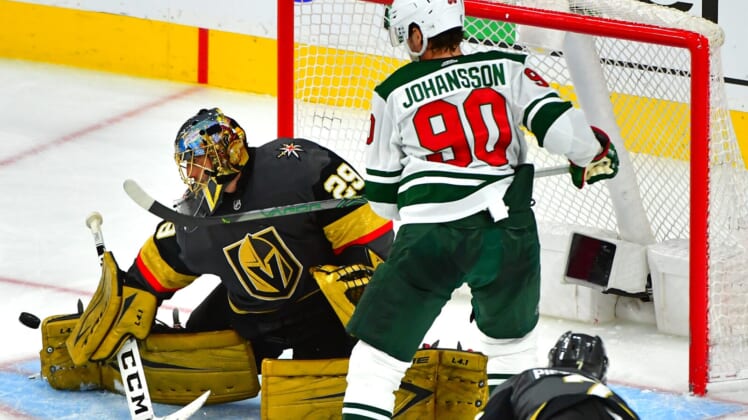 No one called it a must-win but it really was for the Vegas Golden Knights who even up their NHL Stanley Cup Playoffs series with the Minnesota Wild thanks to a two-goal night by Alex Tuch and the sure hands of Marc-Andre Fleury.

Heading into Game 2 of their playoff series down one game to none against the Minnesota Wild, the Vegas Golden Knights needed to get back to playing their game. That included using their speed and offensive prowess to do better and pressure Wild goaltender Cam Talbot. Vegas did just that Tuesday night and now will head back to St. Paul tied at one game apiece after a big 3-1 win in Las Vegas Tuesday night.

It took over 95 minutes of play over two games but the Golden Knights finally found a way to put one past Cam Talbot when Jonathan Marchessault found the top corner, the goal coming only a few seconds after Matthew Dumba opened the scoring for the Wild in the second period.

From there, Alex Tuch would score two goals (that were nearly identical) as he would slap home pucks after using his speed to streak towards the net. Playing with speed was one of the concepts hammered home by head coach Peter DeBoer, as well as many of the players, during their pre-game media availability and Game 2 served as an example of why. All three Golden Knights goals came off the rush as their forwards used speed to create holes in the stout Wild defense.

Now the series moves back to Minnesota where the Golden Knights’ struggles have been well documented. They have never won a game at Xcel Energy Center across the entirety of their existence, a stat that will need to change if they want to advance to the second round.

Fleury and Talbot Continue to Stand on their Heads

The amazing play of the goaltenders on both sides continued throughout Game Two as fans were treated to some spectacular saves. In a reversal of the events of Game One, it was Fleury that had to deal with the first-period onslaught but who turned away chance after chance to keep his team in the game. From there, the Golden Knights found their footing and managed to pull out the win.

“Not the start we wanted but that’s what Fleury does,” said Marchessault after the game. “He gives us a chance to win every night and he stood on his head the whole first period.”

Despite losing this game, Talbot played well once again and has been a consistent presence in the Wild crease. There were rumblings before the series began over which Minnesota goalie would get the starting position, but Talbot’s play through two games has silenced all of that.

Tensions flared as the two teams advanced deeper into the series. With neither team known to shy away from physical play, it was expected that this series would get rough and physical as often happens in playoff hockey. Power forward Ryan Reaves made his presence felt for the second straight game, throwing 10 hits in just 9:03 of ice time.

Tomas Nosek missed most of the game after taking a brutal hit early in the first period. Staying healthy in a series as rough as this one will be important and Nosek’s status will be followed closely as the Golden Knights are already missing players to injury such as sniper Max Pacioretty.

For the Wild, their most dominant line continues to be Jordan Greenway, Joel Eriksson Ek, and Marcus Foligno. All three of those players use their large frames to wear down opponents with physical play and they have been effective against Vegas so far.

Golden Knights Remember How to Score

It took a while but the Golden Knights finally put a puck in the back of the net. For a team that so often dominates the shot count, they’ve shown a concerning pattern of not converting those shots into goals. Since at the end of the day it’s the team with the most goals that wins the game, and shots aren’t really taken into consideration, the Golden Knights were surely relieved to score three tonight.

“Getting a goal was critical,” head coach Peter DeBoer said. “We were going on four-plus periods [without a goal] by that time.”

Goals have proven to be hard to come by thus far and getting three tonight will be a big boost for the Golden Knight’s confidence. While Fleury has been playing excellent hockey at the moment, the Wild are getting too many chances to continue to be held to one goal for long. Don’t be surprised if one of the games in Minnesota turns into a shootout.

While the Golden Knights will be relieved they won tonight, the Wild will also be content with the split on the road. This series is turning out to be the dogfight that everyone expected and these next two games in Minnesota will be crucial for determining the winner.

Will the Golden Knights snap their drought in Minnesota or will the Wild defend their home ice? Game 3 is Thursday at 6:30 PM PDT.