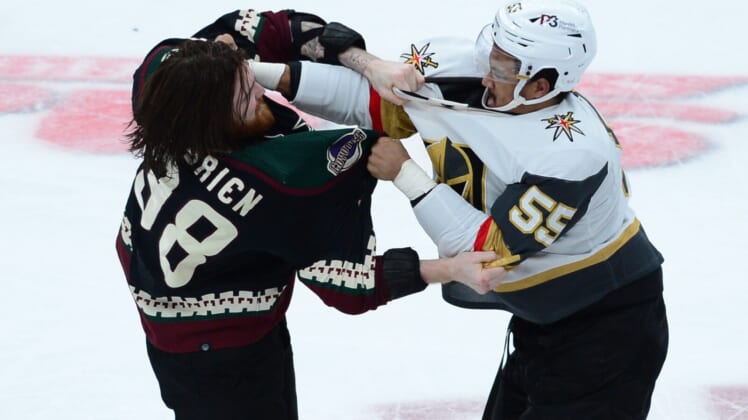 The Coyotes are one of the worst teams in the league, but it was still an encouraging sign that the Golden Knights put such a beat down on them. Picking up two points is important, but the unusual nature in which they did so was very entertaining and a good omen for the future. Even the worst NHL teams are tough matchups, but the Golden Knights completely outclassed the Coyotes.

Laurent Brossoit got the nod in net for the Golden Knights and put forward a strong performance, stopping all of the medium and low danger shots he faced at 5-on-5. He has a 4-1 record through five starts this season and has stepped up whenever his name has been called.

For those that wanted an exciting hockey game, this one had lots of goals but was short on suspense. It was never close as the Golden Knights asserted themselves from start to finish. It was the type of game that one would expect from a Stanley Cup contender against the Coyotes.

Max Pacioretty has quietly been excellent in the few games he’s been available this season. Despite missing a significant amount of time because of an injury, he hasn’t shown any signs of lingering damage and has been his usual deadly self while on the ice.

He scored twice tonight, playing alongside captain Mark Stone and Chandler Stephenson. Those three have been great together and it will be interesting to see if recently acquired Jack Eichel breaks that trio up when he heals from his surgery.

No matter who he’s playing with, Pacioretty is one of the Golden Knights best offensive weapons, and having him at their disposal is a massive privilege. It’s good to see him back on the ice again.

Golden Knights starting to heat up

The Golden Knights are starting to play better hockey and get on a roll. This has been partly due to the massive amount of players returning from injuries. Still, in addition, the Golden Knights have gotten a few strong performances from a variety of role players.

“They [the Coyotes] played better than the score indicated, especially early. I thought we were opportunistic,” said head coach DeBoer after the game, “but I liked our game a lot better than I did the other night in Anaheim.

The Vegas Golden Knights have a big game ahead of themselves as they get ready to face off against the Calgary Flames on Sunday. The Flames have been one of the best teams in the NHL through this early going and are a fellow Pacific Division team.

This will be a great test for the Golden Knights to see if they measure up against a team right now among the NHL’s elite. The Flames have one of the best goalies in the league in Jacob Markstrom and a balanced scoring attack led by Johnny Gaudreau and breakout star Andrew Mangiapane.

“We got to get ready for Calgary because they’ve been, I think, one of the best teams in the league this year.” said forward Jonathan Marchessault after the game.

On Sunday night, the puck drops for the big matchup against the Flames at 7 PM Pacific Time.