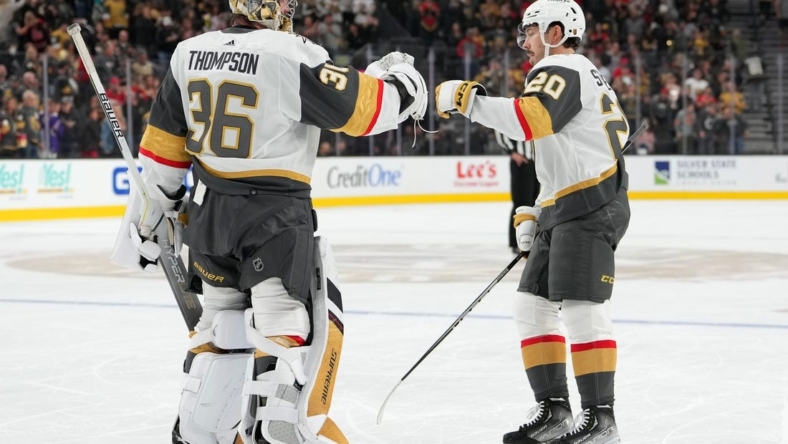 Mark Stone had a goal and an assist and Chandler Stephenson had a short-handed goal as the visiting Vegas Golden Knights jumped out to an early four-goal lead and then held on for their sixth consecutive victory, 5-4, over the Ottawa Senators on Thursday.

William Carrier, Reilly Smith and Zach Whitecloud also scored for Vegas, which improved to 5-0-0 all-time in Ottawa. The Golden Knights, who have won 10 of their first 12 games under Bruce Cassidy, have also won their last seven in a row against the Senators.

Logan Thompson made 42 saves for his sixth win of the season for the Golden Knights who jumped out to a 5-1 lead in the first 30 minutes.

Claude Giroux and Tim Stutzle each scored two goals and Brady Tkachuk had three assists for Ottawa which dropped its fourth straight game. Anton Forsberg stopped 14 of 19 shots before giving way to Cam Talbot midway through the second period. Talbot, coming back from a preseason rib injury, made 13 saves in his Senators debut.

Stone gave Vegas a 1-0 lead 82 seconds into the contest with his fourth goal of the season, intercepting a Thomas Chabot clearing pass in the low slot and then firing a wrist inside the left post.

Ottawa tied it at the 4:12 mark when Giroux, dumping the puck in from the neutral zone during a line change, one-hopped a shot over Thompson’s glove.

The Golden Knights then scored four goals in the span of 21 minutes to increase their lead to 5-1. Smith made it 2-1 with a power-play goal, finishing a 2-on-1 with William Karlsson with a shot into the top left corner for his third goal of the season.

Whitecloud made it 3-1 with 32 seconds left in the first period when he one-timed a Stone pass from the slot for his first goal of the season.

Stephenson increased the lead to 4-1 at the 5:15 mark of the second period with a backhand shot around the left pad of Forsberg at the end of a 2-on-1 break with Nicolas Roy after a Stutzle giveaway.

Carrier made it 5-1 at the 10:14 mark, scooping up the puck in the slot after Alex DeBrincat fanned on a pass and then backhanding a shot through the pads of Forsberg.

Ottawa cut it to 5-3 later in the period on a power-play goal by Giroux, who one-timed a Jake Sanderson feed for his fifth goal of the season, and Stutzle’s rebound of a Tkachuk shot near the end of the period. Stutzle followed that up with his third goal of the season early in the third period to make it 5-4, one-timing a Tkachuk pass following a Brett Howden turnover in his own zone.

The Senators pulled Talbot for an extra attacker with 1:50 left but managed just a Giroux wrist shot that Thompson gloved.