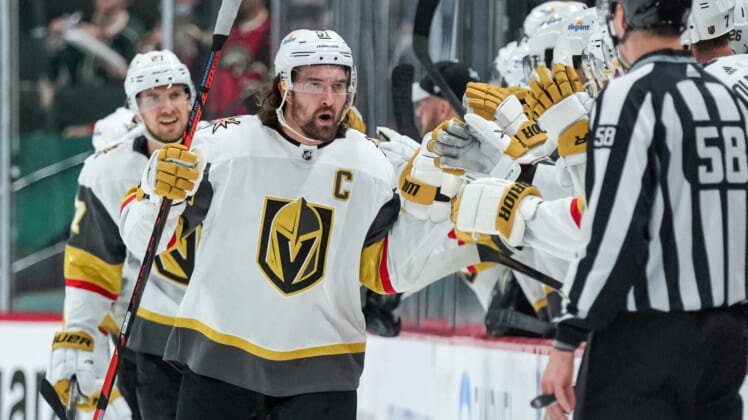 May 20, 2021; Saint Paul, Minnesota, USA; Vegas Golden Knights forward Mark Stone (61) celebrates his goal with teammates during the second period in game three of the first round of the 2021 Stanley Cup Playoffs against the Minnesota Wild at Xcel Energy Center. Mandatory Credit: Brace Hemmelgarn-USA TODAY Sports

After an almost disastrous first period that saw them fall behind 2-0, the Vegas Golden Knights rally to take a 2-1 series lead over Minnesota.

For 20 minutes, all seemed lost. The Vegas Golden Knights quickly fell behind 2-0 to the Minnesota Wild in the first period of Game 3 of the first round of the NHL Stanley Cup Playoffs before an epic comeback and 5-2 win to take a 2-1 series lead over the Minnesota Wild.

After almost falling behind 3-0, when a goal was overturned due to a missed offsides call, the Golden Knights entered the intermission knowing that something needed to change. When they retook the ice, the Golden Knights looked like a brand new team and rallied for a three-goal second period

Now that they lead this first-round series two games to one, the Golden Knights hold a significant advantage. Teams that win Game 3 in a series tied 1-1 go on to win the series just over 70% of the time. Game 4 on Saturday night now presents an even greater challenge for the Wild, who, if they lose, will be one game away from elimination when they head back to Las Vegas.

A critical moment occurred late in the first period when Joel Eriksson Ek put home a rebound to grow the Wild’s lead to three. Vegas head coach Peter DeBoer was quick to challenge for offsides, and minutes later, the goal was reversed, keeping the lead at two. The Wild wouldn’t score another goal the entire game, struggling to muster any pressure against a rejuvenated Golden Knights team.

After scoring only three goals across the first two games, the Golden Knights offense finally broke free and put five past Wild goalie Cam Talbot. Captain Mark Stone led the way with a pair of goals, including the empty-netter for good measure. After having only one shot through the first two games, Stone had five tonight, including the two that found the back of the net.

“He’s a great captain and leader on the team,” commented forward Reilly Smith postgame. “He scores that goal early for us and then that one late for us to ice the game. That’s what you need from your best player.”

For a team that has struggled heavily at Xcel Energy Center in Minnesota, the lackluster start to the game seemed to indicate the return of the same old demons that have haunted the Golden Knights. However, that second-period effort to bust the slump exorcised those issues and swung the momentum of not only that game, but the entire series.

A Tale of Two Games

Similar to the first two games, Game 3 could be split into two distinct sections: the first period and the last forty minutes. Minnesota dominated the first period, controlling 75% of scoring chances and 100% of the goals, but after that, the roles switched, and the Golden Knights became the aggressors.

“I don’t think we could have played any worse in the first period,” said Smith. “It felt like they were beating us to the puck and we were playing slow.”

That all shifted when the second period began, and the Golden Knights took the ice like they were shot out of a cannon. While no player nor coach Peter DeBoer would share what was said during that intermission, it’s clear that there was a switch that was flipped.

“That’s the first appearance other than maybe period one of Game 1 of our identity,” said DeBoer. “That’s something that we want to do consistently here in the playoffs.”

Once again, Fleury was one of the best players on the ice. After splitting starts with Robin Lehner for the entire regular season, Fleury has established himself as the go-to guy so far in the playoffs with three excellent performances.

The Wild have been dominating the Golden Knights for long stretches of play, but the Golden Knights have emerged relatively unscathed because of Fleury’s play. In addition to his strong play, Fleury is no stranger to the playoffs and brings a veteran presence that can help in games like tonight where they fall behind early.

“He’s been giving us a chance to get our legs,” said captain Stone. “He’s allowed us to stay in hockey games. I don’t think we’ve brought our full 60 minutes. It was the same tonight.”

As long as Fleury continues playing this well, there is no reason for DeBoer to look at substituting Lehner for a game. The two goalies shared the William M Jennings Trophy for the lowest combined goals-against average during the regular season and make up one of the best combinations in the league.

After splitting the first two games at home, it was pivotal for the Golden Knights to steal at least one in Minnesota. Getting this first one relieves lots of the pressure for Game 4 and should force the Wild to play a more aggressive game, something they’re not suited for.

Minnesota was one of the best NHL teams at home during the regular season, sporting a 21-5-2 record that matched Vegas exactly. They were surely excited to split the first two games and now the Golden Knights have at least done the same.

A long travel day yesterday surely played a part in the team’s slow start tonight, yet every team has to deal with these issues and if a couple of bounces had gone the other way, Minnesota’s lead may have been insurmountable.

“We were slow, sluggish,” commented Stone. “Once we started transitioning the puck, once we started moving our feet…..got the bench going a bit and we were ready to push forward a bit.”

The Wild will have extra motivation on Saturday as they will be one loss closer to elimination. Another sluggish start, and the Golden Knights could find themselves relinquishing their lead in the closely contested series.

Game Four takes place on Saturday at 5 PM PDT. The game will be held in Minnesota before moving back to Las Vegas for Game Five.